The Orioles earn the split against a hot Twins team @ home as they rally to win the last 3 Games of the Series after dropping the first 2. 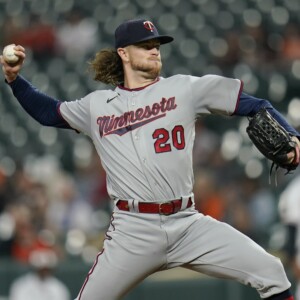 Game 1 : Twins 2, Orioles 1 – Chris Paddack pitches 6 innings to finally earn his 1st win as a Twin & the Minnesota bullpen doesn’t allow a hit after taking over in the 6th as they hold on to take the opener. Ryan Jeffers singles home a run in the 5th against O’s starter, Tyler Wells to break a scoreless tie in the 5th but Roughned Odor leads off the bottom of the inning w/ a triple & scores on a sac fly by Ramon Urias to tie it. Wells goes 5 innings, allowing 1 run on 4 hits, strikes out 4 & walks none in another great outing by an Orioles starter. Carlos Correa puts Minnesota ahead w/ an RBI single in the 6th off of reliever, Brian Baker & the Twins bullpen does the rest. Paddack departs w/ men on 1st & 3rd w/ 1-out in the 6th but Joe Smith gets Ryan Mountcastle to bounce into an inning ending double play & keep the game tied. 3 relievers combine to close it out for Minnesota, who has now won 3 in a row & 10 of their last 11. Baltimore has lost 6 of their last 8. 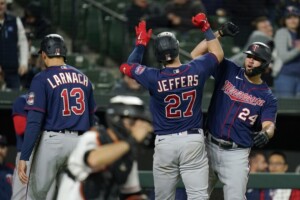 Game 2 : Twins 7, Orioles 2 – Ryan Jeffers hits a tiebreaking, 3-run blast in the 6th as they Twins pull away late against the Orioles bullpen to win their 4th in a row. The Twins have outscored opponents 63-25 in their current 13-game run & 25-7 in their 4-game winning streak. Jose Miranda doubles home a run in the 4th (his first major-league hit & RBI) & Jeffers scores on a single by Jorge Polanco to put Minnesota ahead against O’s starter, Joe Ryan, who goes 4 2/3, allows 2 runs on 6 hits, strikes out 3 & walks 1. Bruce Zimmerman in the 5th. The O’s lefty goes 5 innings, allows 2 runs on 4 hits, he walks 2 & strikes out 4 but earns a no decision. Trey Mancini ties the game in the 5th w/ an RBI single, has 2 hits on the night. Jeffers blasts off in the 6th against Joey Krehbiel to blow the game open & the Twins score 2 more in the 9th, as Byron Buxton doubles home a run & scores on a sac fly by Polanco. Minnesota has now won 12 of their last 13 & remains scorching hot. Baltimore has lost 7 of their last 9. 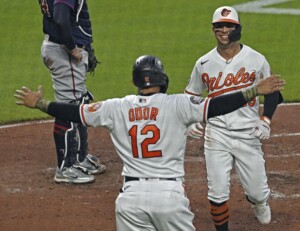 Game 3 : Orioles 9, Twins 4 – The Orioles bust loose for a 6-run 3rd inning against former Orioles starter, Dylan Bundy, putting up a crooked number as they roll to a big win in Game 3. Cedric Mullins gets it going w/ a 2-run shot & Austin Hays singles home Trey Mancini, Anthony Santander scores on an infield single by Odor, who scores on a 2-run blast by Ramon Urias to cap the 6-run uprising. Minnesota gets back in it, scoring 4 times in the 4th – Carlos Correa hits a 2-run blast, Dee Gordon singles home a run & Gio Urshela tacks on a sac fly to cut the lead to 2 against Orioles starter, Kyle Bradish who allows 4 runs on 6 hits, strikes out 3 & walks 2 in just his 2nd major-league start. Santander singles home Mullins, Austin Hays adds a sac fly & Ryan Mountcastle doubles to score Santander ad the O’s light up Bundy for 9 runs on 11 hits, he strikes out 3 & walks 2 as the former Oriole takes the loss & then tests positive for COVID-19 along w/ manager Rocco Baldelli & 2B Luis Arraez, all 3 would muss the Series finale. Minnesota has their winning streak snapped but has still won 13 of 15. Baltimore wins for just the 3rd time in their last 10 games. 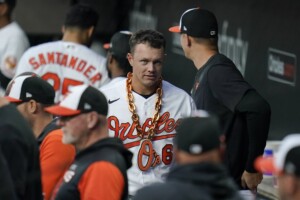 Game 4 : Orioles 5, Twins 3 – Ryan Mountcastle homers twice, including going back to back w/ Austin Hays to break a tie in the 8th as the O’s win again to earn the split against the Twins. Mountcastle hits a solo shot in the 2nd & Cedric Mullins adds another in the 3rd after the Twins had tied it. Byron Buxton launches a 2-run blast in the 5th against Orioles starter, Spenser Watkins to put Minnesota ahead – Watkins allows 3 hits on 7 hits, walks 2 & strikes out 2 in 4 2/3 innings of work but he keeps the O’s in the game, pitching into the 5th. Jorge Mateo hits the 4th solo homer of the night for the Birds as he ties it in the 5th against reliever Caleb Thielbar, who came on in 5th after starter, Chris Archer tosses 4 innings, allowing 2 runs on 5 hits, strikes out 6 & walks none. Carlos Correa is hit on his finger in the 7th & has to leave the game, he may have a broken finger. Hays throws out Max Kepler at home trying to score in the 4th & connects on a solo blast that gives the O’s the lead, followed by Mountcastle’s solo blast as the duo go back to back in the 8th. Minnesota has now lost 2 in a row after a 4-game winning streak. Baltimore wins for the 2nd time in a row after losing 8 out of their last 10.

The Orioles show lots of heart to rebound & earn the split after rough time in the first 2 games. They will now host Kansas City for 3 before heading to St. Louis for 3 against another NL Central foe, the Cardinals.
⚾️⚾️⚾️
GO O’S!!
#SplittingHairs