After back to back rain outs the O’s & Royals cram in a Mother’s Day doubleheader on Sunday & a Monday Matinee in which the O’s take 2 out of 3 to take the Series. 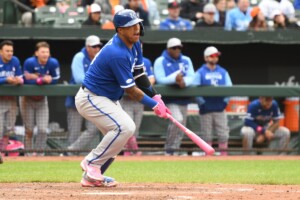 (DH) Game 1 : Royals 6, Orioles 4 – Royals Manager, Mike Matheny wins his 700th career game as Michael Taylor’s go ahead single in the 9th puts the Royals ahead late after 2 O’s errors extend the inning & Kansas City goes on to take the opener. O’s starter, Jordan Lyles becomes the first Oriole to pitch into the 7th inning, allowing 3 runs on 7 hits, he strikes out 5 & walks 1, his deepest start since May 15th 2018. Edward Olivares singles home a run to tie it in the 3rd & Andrew Benintendi adds a sac fly in a 2-run 5th against Lyles but Ryan Mountcastle doubles home Austin Hays in the bottom of the inning to cut the lead to 1. Hays goes 4-4 & scores twice, he leads the O’s w/ 9 multi-hit games. Roughned Odor puts the O’s ahead on a 2-run double in the 7th against Royals reliever Collin Snyder but commits a huge error in the 9th that allows the go ahead run to reach & after a throwing error by closer Jorge Lopez moves him up a base & Taylor puts Kansas City ahead for good, followed by an RBI single by Salvador Perez to add an insurance run. Scott Barlow strands 2 runners as he closes it out in the 9th. Baltimore goes 3-12 w/ men in scoring position & leaves 11 men on base. 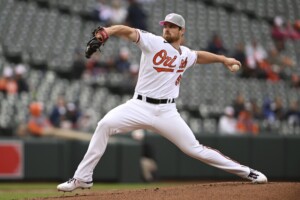 (DH) Game 2 : Orioles 4, Royals 2 – Bruce Zimmerman pitches 6 strong innings & the bats contribute some timely hits as the Orioles rebound to earn a split in their Mother’s Day Doubleheader w/ the Royals. Zimmerman allows 2 runs on 5 hits, strikes out 5 & walks none, the 2nd consecutive outing that an Orioles starter has gone more than 6 innings, as the starting pitching continues to improve, keeping the Orioles in almost every game. The O’s get to Royals starter, Daniel Lynch early, scoring 3 times in the 1st inning – a passed ball allows Cedric Mullins to score from 3rd, Ryan Mountcastle adds an RBI single & Ramon Urias hits a sac fly to give Zimmerman an early cushion. Hunter Dozier triples & scores on a sac fly by Whit Merrifield in the 2nd to get Kansas City on the board & singles home a run in the 6th that cuts the lead to 2, accounting for both Royals run, after Tyler Nevin had given the Birds an insurance run in the 5th against reliever Joel Payamps. Lynch allows 3 runs on 4 hits, strikes out 5 & walks 4 in 3 2/3 innings of work as the bullpen goes 4 1/3 to eat up some innings. Keegan Akin pitches 2 scoreless & Dillon Tate closes it out in the 9th to pick up the save. Austin Hays goes 5-7 in the 2 game doubleheader & leads the team w/ 9 multi-hit games. Baltimore has now won 3 of their last 4 & 4 of their last 6 w/ Game 3 awaiting. 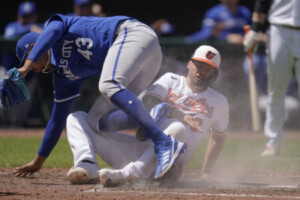 Game 3 : Orioles 6, Royals 1 – Tyler Wells pitches 6 solid innings, the 3rd Oriole starter in a row to pitch into the 6th inning, picks up his first win of the season as the O’s beat the Royals to win for the 4th time in 5 games & win the Series against the Royals. The O’s score 6 times in the 5th (on only 4 hits) to break the game open against Kansas City starter, Carlos Hernandez – Jorge Mateo singles home a run, steals 2nd & the the throwing error on the steal attempt by C MJ Melendez allows Anthony Bemboom to score, then Trey Mancini singles home Mateo & scores on a wild pitch by Hernandez. Ryan Mountcastle caps the 6-run outburst w/ an RBI single that scores Anthony Santander & ends the day for Hernandez. He goes 4 2/3 innings, allows 6 runs on 7 hits, strikes out 2 & walks 2, the Royals go 1-6 w/men in scoring position as they don’t give Hernandez much help offensively. Wells allows an RBI single to Ryan O’ Hearn in the 1st but cruises the rest of the way retiring 16 of the last 19 hitters he faces, allows just 5 hits, strikes out 3 & doesn’t walk a man in the longest outing of his career. Baltimore finishes 6-4 on 10-game homestand & has now won 4 out 5 for the first time this season They are now 16-6 against Kansas City @ Camden Yards since 2015 & have won 6 of their 7 home Series against the Royals in that span, they also split a 4-game set last season. Kansas City falls to a season high 8 games under .500, they have lost 7 of their last 9.

The Orioles will now head to St. Louis to play the Cardinals in an interleague matchup, the O’s have never played in the New Busch Stadium, which has been around since 2015. They will be the last team to visit the Stadium.
⚾️⚾️⚾️
#SpreadingTheirWings