The Orioles take 3 out of 4 from the White Sox in Chicago as they continue their latest trend of not losing Series’ & even rally in the 9th inning of the Series finale to nearly pull off the sweep. 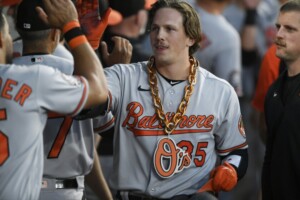 Game 1 : Orioles 4, White Sox 0 – Adley Rutschman homers, doubles & drives in 3 & Dean Kremer pitches nearly 6 shutout innings as the Orioles beat the White Sox in the opener of the 4-game Series. Rutschman hits a 2-run shot off of White Sox starter Johnny Cueto in the 4th to give the O’s the lead & that would be all Kremer would need as he goes 5 2/3 scoreless, allows 7 scattered hits, strikes out 4 & walks 1 in his 2nd straight scoreless outing. He is also helped out by all 3 Oriole outfielders, who caught nearly everything that was hit their way, including several drives at the wall. Rutschman doubles home Austin Hays in the 6th off of reliever Reynaldo Lopez to add another run & Cedric Mullins singles home Tyler Nevin against Jimmy Lambert in the 9th to cap the scoring on the evening for the O’s. Felix Bautista & Dillon Tate each pitch an inning & Jorge Lopez records the last 4 outs to earn the save. Rutschman is 14-41 in his last 12 games & is hitting .341 over that stretch after coming in hitting. 211 w/ 1 HR. Ryan Mountcastle has 3 hits, including 2 doubles & scores on the Rutschman homer, Austin Hays doubles & scores a run & Mullins has 2 hits & an RBI for Baltimore in the win. Cueto goes 5 1/3, allows 3 runs on 7 hits, strikes out 7 & walks 1 but takes the loss. Baltimore wins for the 2nd game in a row & 3rd time in their last 4. Chicago is now 8-8 in their last 16 games & continues to fight the injury bug while treading water in the AL Central.

Game 2 : Orioles 4, White Sox 1 – Austin Voth & 4 relievers combine for a 1-hitter, the benches empty for both teams in a minor incident including Jorge Mateo & Michael Kopech & the Orioles beat the White Sox again. Cedric Mullins scores on a wild pitch from Kopech in the 1st & Mateo is hit by Kopech in retaliation for Dean Kremer hitting Josh Harrison the night before which leads to some jawing back & forth & the benches clearing. Mateo then steals 2nd & scores on a single by Richie Martin as the Orioles capitalize on the hit batter & add on the free run. Voth goes 3 innings in his 2nd start, he walks A.J. Pollock who scores on a double by Jake Burger in the 2nd, it is the one of only 2 walks, the lone hit & the lone run allowed by Voth, who also strikes out 3 on the night. Rutschman scores on a balk by Kopech in the 4th as the frustration starts to set in for the Sox pitcher – he goes 6 innings, allows 3 runs on just 3 hits, strikes out 2 & walks 4, he also loses his 2nd straight start. The O’s start early & keep running all night as they swipe 5 bases in the game – Mateo & Martin steal 2 & Mullins swipes 1. Austin Hays doubles to score Trey Mancini in the 8th off of reliever Vince Velasquez to add an insurance run & after Joey Krehbiel, Bryan Baker & Cionel Perez combine to pitch 5 innings in relief, Jorge Lopez pitches the 9th to close out the 1-hitter. Baltimore has won 7 of their last 9, is 4-1 in their last 5 & has outscored it’s opponents 15-1 during it’s current 3-game winning streak. Chicago has now lost 3 in a row & slips to 8-9 in their last 17 as thier season continues to spiral out of control. 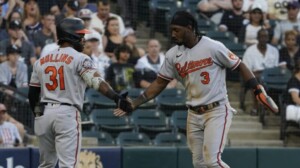 Game 3 : Orioles 6, White Sox 2 – Jorge Mateo homers, doubles, drives in a run & scores twice, Austin Hays doubles & drives in 3 & Spenser Watkins allows 1 run over 5 innings as the Orioles take Game 3 to win the Series in Chicago. Mateo hits a solo shot off of White Sox starter Lance Lynn to break a scoreless tie in the 3rd after Lynn retires the first 8 batters he faces to start the game & give the O’s the early lead. The Sox get 1 back in the 3rd when Luis Robert singles & Rookie, Lenyn Sosa scores on an error by Austin Hays in RF to get the White Sox on the board, the 2nd error of the inning against the Birds as Tyler Nevin’s throwing error allows Sosa to reach. O’s starter Spenser Watkins picks up his 3rd win in 19 career starts, he allows 1 run on 5 hits, strikes out 4 & walks 1 as he makes his first start since May 22. Lynn hits Trey Mancini w/ the bases loaded to score Robinson Chirinos & then scores on a bases clearing double by Austin Hays against reliever Jose Ruiz in the 7th to blow the game open. Lynn allows 6 runs on 6 hits in 6 2/3 innings, he strikes out 8 & walks 1. Seby Zavala grounds out to score Gavin Sheets in the 9th but Dillon Tate wraps it up as he works 2 innings in relief. Baltimore has now won 4 in a row for the 1st time this season & has now won 8 of their last 10, they are 23-8 when they score 5 runs or more. Chicago has now lost 10 of their last 18 & 4 in a row @ home. 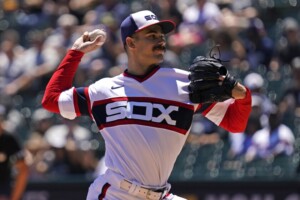 Game 4 : White Sox 4, Orioles 3 – Dylan Cease strikes out a career-high 13 & tosses 7 strong innings, Gavin Sheets homers & the White Sox avoid the sweep @ home as they salvage a game in the Series. Sheets hits a 2-run shot off of O’s starter Jordan Lyles in the 2nd & newly acquired Jonathan Arauz hits a solo shot in the 3rd off of Cease for Baltimore, becoming the 38th player since 1974 to have homered in their first hit as an Oriole. Andrew Vaughn hits a sac fly to score Rookie Lenyn Sosa who had doubled for his first major-league hit in the 3rd against Lyles who goes 7 innings, allows 4 runs on 6 hits, strikes out 4 & walks 1. Cease has a 2.56 ERA in 15 starts this season & has been the clear cut ace of the White Sox staff – he allows 1 run on 4 hits, strikes out 13 to achieve a career-high & walks just 1 in 7 innings. He comes off of a start in which he struck out 11 against Toronto on Tuesday. Seby Zavala singles to score Jose Abreu in the 4th against Lyles but commits 2 costly errors in back to back plays in the 9th to put the first 2 men on against reliever Kendall Graveman. Arauz then singles to score Mountcastle & Cedric Mullins adds a sac fly to score Adley Rutschman as the Birds cut it to 1 in the 9th but Graveman is able to strike out Trey Mancini to end the game. Chicago avoids their first 4-game sweep @ home since September 4-7, 2017 against Cleveland & has still lost 10 of their last 19. Baltimore has their 4-game winning streak snapped but has still won 8 of their last 11.

Baltimore takes 3 out of 4 against the White Sox in Chicago, they will now head to the Pacific Northwest to play the Seattle Mariners before heading to Minnesota for 3 as they finish up an 11-day, 10-game road trip.
⚾️⚾️⚾️
GO O’S!!
#GrowingUpFast