The Orioles lose their first Series in over 3 weeks as they drop 2 out of 3 in Seattle despite taking the opener but are outscored 11-3 in the final 2 games, including being shut out in the rubber game. 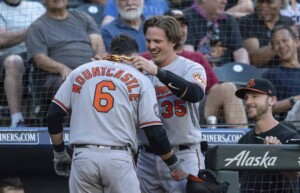 Game 1 : Orioles 9, Mariners 2 – Tyler Wells is nearly perfect for 5 innings & Adley Rutschman homers & drives in 2, as the O’s homer 5 times against Mariners pitching to take the opening game of the Series. Rutschman singles to score Trey Mancini in the 1st & Cedric Mullins doubles to score Jonathan Arauz as the O’s jump ahead early & continue to rake against Mariners starter George Kirby. Rutschman & Ryan Mountcastle go back-to-back in the 3rd, while Anthony Santander & Austin Hays also go back-to-back in the 4th, the first time in franchise history that the O’s have gone back to back in consecutive innings. Kirby goes 4, he allows 7 runs on 9 hits (including 4 HR’s) he strikes out 2 & walks 1. Wells is perfect through 4 2/3 until Cal Raleigh hits a solo shot to get Seattle on the board in the 5th, it is the only hit & only run allowed by Wells who goes 5 innings, strikes out 3 & walks none on a night where the Orioles didn’t expect him to go deep into the game. Jorge Mateo hits a solo homer off of reliever Penn Murfee in the 6th & Joey Krehbiel & Keegan Akin close out the 2-hitter for the O’s as they combine for 4 innings of relief. Eugenio Suarez doubles home Julio Rodriguez in the 6th off of Krehbiel but Seattle can’t muster anything else & Anthony Santander hits a sac fly in the 9th off of former Oriole, Tommy Milone to cap the scoring for the Baltimore. Akin goes 3 1/3 innings to pick up his first save & close it out for the O’s who break the Mariners streak of 24 consecutive games without a starter allowing atleast 4 runs as they tag Kirby for 7 runs in just 4 innings. Baltimore is now 29-0 when leading after 8 innings & has now won 4 in a row for the first time all season, they have also won 9 of their last 12 & 4 of the first 5 on their current 10-game road trip. Seattle is now 6-6 in their last 12 & 5-2 in their last 7. 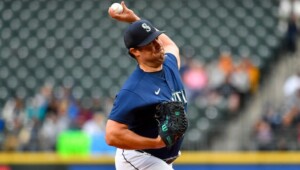 Game 2 : Mariners 2, Orioles 0 – Robbie Ray allows just 1 hit over 7 innings, Jesse Winker cracks a clutch 2-out, go-ahead double in the 8th & the Mariners rebound to take Game 2 @ home. Both pitchers set the tone early as O’s starter Dean Kremer goes scoreless inning for scoreless inning against M’s starter Robbie Ray – Kremer goes 7 shutout innings, the first time any Orioles starter has pitched 7 scoreless innings since John Means No-Hitter, conveniently in Seattle, on May 5th of last year. Kremer allows just 4 hits, strikes out 5 & walks 2 while Ray goes 7 scoreless as well but allows only 1 hit, a single to Ryan Mountcastle w/ 1-out in the 4th. He strikes out 8 & walks 3. Ray has allowed just 2 earned runs, given up 11 hits, issued only 7 walks, hit 3 batters & has 28 strikeouts over his last 27 innings. Seattle loads the bases in the 4th against Kremer but he gets Taylor Trammell to ground into a doubleplay to end the inning. Diego Castillo tosses a scoreless 8th & Winker finally breaks the scoreless tie in the bottom of the inning as he doubles off of reliever Felix Bautista to score Julio Rodriguez who had reached on an error by Ryan Mountcastle. Paul Sewald works a perfect 9th, striking out 2 of the 3 hitters he faces. Baltimore has their season-high 4-game winning streak snapped but they are still 9-4 in their last 13 games. Seattle is 7-6 in their last 13 & has now won 6 of their last 8, including 3 of their first 5 against the Orioles this season.

Game 3 : Mariners 9, Orioles 3 – Julio Rodriguez homers in a 6-run 4th inning as the Mariners play small ball early, bust loose later & never look back as they win both this Series & the season Series against the Orioles. Abraham Toro scores on a throwing error by 3B Jonathan Arauz on a bunt by Sam Haggerty (Arauz commits 2 crucial errors in the inning), Adam Frazier scores on an infield single by J.P. Crawford & Haggerty scores on a sac fly by Rodriguez in a 3-run 1st against O’s starter Austin Voth. Voth goes 3 innings, allows 3 runs but only 1 earned on 4 hits, strikes out 2 & walks 1 while getting some bad luck along the way. Ryan Mountcastle doubles off of
Mariners starter Chris Flexen to score Anthony Santander & get the O’s on the board in the 4th, Flexen allows 3 runs on 7 hits in 6 innings of work, he strikes out 3 & walks 2. Seattle starters have allowed 3 earned runs or less in 26 of thier last 27 outings. Haggerty doubles to score Toro, Crawford hits a sac fly to score Adam Frazier & Rodriguez hits a 2-run shot, all coming off of reliever Nick Vespi who is roughed up for the first time this season.
Winker scores on a wild pitch by Bryan Baker & Cal Raleigh hits a sac fly to score Eugenio Suarez in the crazy 6-run 4th inning that blows the game wide open. Toro, Frazier & Haggerty, the bottom of the Mariners order, combine for 7 hits & 6 runs scored – Haggerty has 2 doubles & a bunt single & Seattle goes 5-13 w/ runners in scoring position. Trey Mancini’s 2-run double off of Flexen in the 5th gets 2 back for the O’s but the rally would end there. Erik Swanson, Ken Giles & Penn Murfee each pitch an inning in relief of Flexen as the Mariners close it out. Seattle has now won 8 of their last 14 & wins takes 4 out of 6 to win the season Series against the O’s. Baltimore has now lost 2 in a row after a season high 4-game winning streak & is 9-5 in their last 14.

Baltimore is now 4-3 on their current 10-game road trip & they will now head to Minnesota to for 3 to finish it. This team is playing winning Baseball & they close out the month of June w/ their first winning month since August of 2017.
⚾️⚾️⚾️
GO O’S!!
#StartingToBelieve