The Orioles lose 2 out of 3 in Minnesota, salvaging the finale after dropping 2 out of 3 in Seattle as their promising 10-game, 11-day road trip ends w/ a 5-5 split after starting off so promising by taking 3 out of 4 in Chicago from the White Sox. 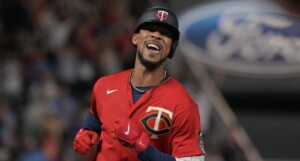 Game 1 : Twins 3 Orioles 2 – Byron Buxton launches a walk-off 2-run homer off of Jorge Lopez as the Twins hand the O’s their first loss when leading after 9 innings this season.The Twins grab the early lead as Jose Miranda singles to score Luis Arraez off of O’s starter Spenser Watkins in the 1st, Watkins who retires the last 15 that he faces after the 1st inning, goes 6 strong, he allows 1 run on 3 hits, strikes out 5 & walks just 1 on the night. Cedric Mullins doubles to score Jorge Mateo in the 3rd to tie the game off of Twins starter Joe Ryan who duels w/ Watkins for most of the night – he allows just 1 run on 2 hits in 7 innings of work, he strikes out 7 & walks 1. Both pitchers going deep into the game is huge for both bullpens & the O’s finally break the tie in the 8th when Ryan McKenna doubles to lead off the inning, moves to 2nd on a ground out by Trey Mancini & scores on a fielders choice by Jorge Mateo as the Birds manufacture a run against reliever Caleb Thielbar. Arraez singles off of the normally automatic Jorge Lopez to end a streak of 21 hitters in a row retired by Oriole pitching & the next batter, Buxton sends the ball over the wall in left & sends Target Field into a frenzy. Lopez hadn’t allowed a HR all season & the Orioles were 29-0 when leading after 8 innings this season, both streaks ended on the same play. It is Buxton’s 2nd walk-off HR this season – he hit a walk-off off of White Sox closer Liam Hendricks on April 24. Minnesota is now won 5 of thier last 9, despite losing 3 out of 5 & suffering back-to-back walk-off losses to Cleveland the previous Series. Baltimore has now lost 3 in a row & 4 of their last 5 after a season high 4-game winning streak & suffers it’s first loss all season when leading after 8 innings, they have now lost 11 in a row @ Target Field. 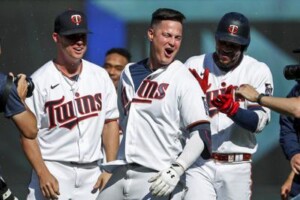 Game 2 : Twins 4, Orioles 3 – The Twins walk it off on the O’s for the 2nd night in a row as Jose Miranda’s RBI single in the 9th off of Jorge Lopez gives the Twins their 2nd win against the Orioles normally lock down bullpen. Tyler Nevin doubles to score Ryan Mountcastle in the 2nd & Anthony Santander hits a solo shot in the 3rd to give the O’s the early lead against Twins starter Sonny Gray. Gray goes 5 innings, he allows 3 runs on 6 hits, strikes out 5 & walks 3. Jorge Mateo hits a sac fly to score Rougned Odor in the 4th but the Birds cannot add on any runs after that & it would come back to haunt them later. O’s starter Jordan Lyles pitches 6 1/3 innings, allows 1 run on 4 hits, strikes out 7 & walks 1 – he retires 12 in a row at one point, departing in the 7th after a solo homer by Nick Gordon gets Minnesota on the board & chases Lyles. Carlos Correa’s sac fly off of Felix Bautista scores Gilberto Celestino & cuts the lead to 1 & then in the 9th the Twins get to the O’s bullpen again to win it. Jorge Polanco hits a solo shot off of Lopez to tie it but Lopez strikes out Gordon before Alex Kiriloff doubles, Gary Sanchez singles & Jose Miranda walks it off w/ another single. Lopez allows 4 hits & a HR in the inning, he hadn’t allowed a HR all season & his ERA was under under 0.80 before the last 2 nights. Minnesota is now the first team in American League history to follow up back-to-back losses w/ back-to-back wins in a single season, they have won 6 of their last 10. Baltimore has now lost 4 in a row & 5 of their last 6 as they continue to struggle of late, they have now lost 12 in a row @ Target Field in Minnesota. 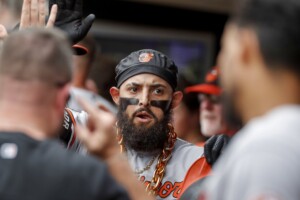 Game 3 : Orioles 3, Twins 1 – Tyler Wells takes a No-Hit bid into the 5th inning for the second consecutive start & wins his 6th straight decision as the O’s take the Series finale & avoid the sweep in Minnesota. Wells goes 6 innings, he allows 1 run on 3 hits, he strikes out a career-high 7 & walks 1 to earn his 7th win as he continues to grow into his starter role – he has allowed 1 run or no runs in each of his last 4 starts. Rougned Odor breaks a scoreless tie in the 4th w/ a solo shot off of Twins starter Devin Smeltzer who goes 6 innings, he allows 3 runs on 6 hits, strikes out 3 & walks 1, matching Wells for most of the game in a scoreless duel before Odor’s HR. Smeltzer has allowed 10 HR’s in his last 32 1/3 innings after not allowing any in his first 24 innings. Nick Gordon doubles w/ 1 out in the 5th for the Twins first hit against Wells & the Twins crack the scoreboard in the 6th on a single by Jorge Polanco to score Gilberto Celestino who was the only walk of the game issued by Wells. Trey Mancini & Ryan Mountcastle go back-to-back in the 6th against Smeltzer to put the O’s back on top for good & Keegan Akin, Joey Krehbiel & Dillon Tate combine to go the last 3 innings & Tate earns his 2nd save by striking out 2 of the 3 he faces in the 9th. Baltimore snaps a 5-game losing streak & wins for just the 2nd time in their last 7 games while snapping a 12-game losing streak @ Target Field. Minnesota wins the Series & despite the loss has still won 6 of their last 11.

Baltimore will now head home after a brutal 10-game road trip that saw them go to Chicago, Seattle & Minnesota, finishing 5-5 to earn a split. Some home cooking is definitely needed & the O’s will host the Texas Rangers on 4th of July as they start a 7-game homestand.
⚾️⚾️⚾️
GO O’S!!
#GrowingPains

Seattle’s Best How Sweep It Is