How Sweep It Is

The Orioles complete their first sweep of the season as they take all 3 from the Texas Rangers @ home to continue their winning streak & remain hot while climbing up the standings in the American League. 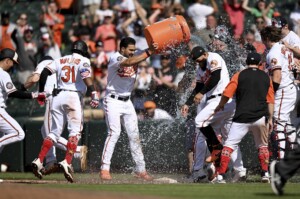 Game 1 : Orioles 7, Rangers 6 (10 innings) – Jorge Mateo is hit by a pitch from Rangers reliever Matt Moore w/ the bases loaded as the Orioles walk it off on the 4th of July to take the opener in the first of a wild back & forth Series. Jonathan Arauz singles home Adley Rutschman & Cedric Mullins doubles home Jorge Mateo in the 2nd against Rangers starter Dane Dunning but the Rangers score 5 times in the 5th on a sac fly by Adolis Garcia to score Josh Smith, an RBI single by Brandon Lowe to score Marcus Semien & a 3-run blast by Mitch Garver against O’s starter Dean Kremer who gets knocked around for the first time all season. Kremer allows 5 runs on 8 hits in 4 2/3 innings, he strikes out 4 & walks 2 in his shortest outing since his season debut on June 5. Mullins hits a solo shot in the 5th off of Dunning, Adley Rutschman & Roughed Odor both score on an error by the 1B Nathaniel Lowe to tie the game in the 6th & knock Dunning out of the game – he goes 5 1/3 innings, allows 5 runs on 7 hits, walks 1 & strikes out 5. The game remains tied until the 9th when Semien hits a solo shot off of O’s closer Jorge Lopez who continues to struggle out of late & the Rangers take the lead again. Down to their last out, Rutschman doubles off of Rangers closer Josh Barlow to score pinch-runner, Ryan McKenna, tying the game again, Rutschman began the day in an 0-18 skid. Moore loads the bases w/ nobody out in the 9th, including an intentional walk to Ramon Urias before hitting Mateo on the left knee & forcing home Austin Hays as the O’s walk it off for the 6th time this season, despite going 2-12 w/ runners in scoring position. Baltimore is now 23-20 after starting the season 14-24 & has now won 2 in a row after losing 4 straight. Texas is now 8-6 in their last 14 & has lost 4 of their last 5. 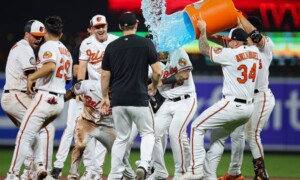 Game 2 : Orioles 10, Rangers 9 (10 innings) – The Orioles become the 1st team in major-league history to allow a game-tying HR in the 7th, 8th & 9th innings & still win the game as they outlast the Rangers in a wild one @ Camden Yards. The O’s score 4 times in the 2nd against Rangers starter Spencer Howard to take the early lead as Jorge Mateo singles home Ramon Urias & scores along w/ Ryan McKenna on a 2-run double by Cedric Mullins, who scores on a double by Trey Mancini. The Rangers respond w/ 3 runs in the 5th against O’s starter Austin Voth, who loads the bases w/ nobody out before giving way to Keegan Akin – he goes 4 1/3 innings, allows 3 runs on 4 hits, strikes out 3 & walks 1. Josh Smith hits a sac fly to score Nathaniel Lowe, Marcus Semien reaches on an infield single to score Mitch Garver & Corey Seager singles to score Brad Miller w/ all 3 runs charged to Voth & Mitch Garver hits a solo shot to tie the game off of Akin in the 7th. The O’s then score 3 more times in the bottom of the 7th as Anthony Santander singles off of reliever Dennis Santana & scores along w/ Trey Mancini on a 2-run single by Ramon Urias but the Rangers would come back to tie it again in the 8th as Lowe hits a 3-run shot off of Nick Vepsi. Ryan McKenna hits a solo shot off of John King in the bottom of the 8th to put the O’s back on top but Corey Seager’s 2-run blast off of Felix Bautista in the 9th puts Texas ahead for the first time. Roughed Odor’s 2-out, solo shot in the bottom of the 9th off of Barlow ties the game again & Mullins doubles home McKenna to walk it off in the 10th off of Matt Moore & sends Camden Yards into a frenzy. Baltimore has now won in walk-off fashion in back to back nights in extra innings & has now won 3 in a row after dropping 4 straight, they are now 24-20 after a 14-24 start. Texas has now homered in 11 straight games, tying their longest run of the season but is now 4-16 in 1-run games & has now lost 5 of their last 6. 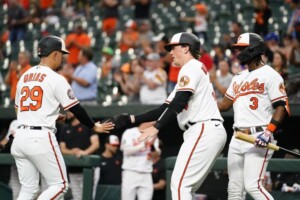 Game 3 : Orioles 2, Rangers 1 – Spenser Watkins pitches into the 7th inning for the first time in his career, the Orioles take advantage of an early error & hold on to win their 5th in a row & earn their first sweep of the season. The O’s get to Texas starter Glenn Otto early as Ryan McKenna reaches on an infield single & Corey Seager’s errant throw allows Adley Rutschman & Ramon Urias to score as the Birds grab the early lead & never look back. Otto goes 5 innings, he allows 2 runs but only 1 earned on just 3 hits, strikes out 5 & walks 3. Watkins goes 6 2/3 innings, he allows just 1 run on 4 hits, strikes out 3 & walks 1 in his first ever start against the Rangers – he allows just an RBI double to Leody Taveras that scores Kole Calhoun in the 5th & continues a streak of allowing just 1 run for a 3rd straight start. Bryan Baker & Cionel Perez each pitch 2/3 of an inning & Jorge Lopez allows a 1-out single to Jonah Heim but still closes it out in the 9th inning, striking out Brad Miller to end it as he rebounds from consecutive blown opportunities against Minnesota to pick up the save. The Orioles get the win despite registering only 4 hits but take advantage of an error & let the pitching do the rest as they win another 1-run game, they are now 11-14 in 1-run games or games that have gone into extra innings. Texas is now 4-17 in 1-run games & has their streak of homeruns in 11 straight games snapped in the process, finishing 1 shy of a Franchise record, while losing 6 of their last 7. Baltimore sweeps Texas for the 1st time since 2017 & is 11-11-4 Series this season, they have now won a season high 5 in a row & get their first sweep in 5 years.

Baltimore picks up it’s first sweep & ties a season-high w/ it’s 4th win in a row all in the same Series. They now host the L.A. Angels for 4 as this 7-game homestand against the AL West continues. This team continues to never say die & is playing the best stretch of ball that it has all season.
⚾️⚾️⚾️
GO O’S!!
#FeelinOmazing

Another Twin Killing Say Halo To My Little Friend