Say Halo To My Little Friend

The Orioles complete their 2nd sweep in a row as well as their first 8-game winning streak since 2005 as they sweep the Angels & continue their run of winning, finishing 7-0 on the homestand & rising up to 2 games back of a Wild Card spot in the AL. 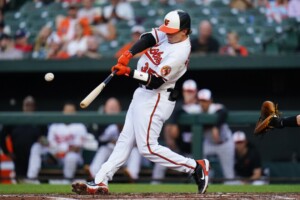 Game 1 : Orioles 4, Angels 1 – Adley Rutschman hits his first HR @ Camden Yards & the O’s win their 5th in a row as Ryan Mountcastle also drives in 2 & Jordan Lyles eats up 6 innings of 1 run ball. Rutschman hits a solo shot in the 2nd off of Angels starter Chase Silseth & Ryan Mountcastle doubles home Anthony Santander in the 3rd to give Lyles some run support. Silseth goes 4 innings, allows 4 runs on 6 hits, strikes out 2 & walks 1.
Trey Mancini singles home Jorge Mateo off of reliever Andrew Wantz & Mountcastle adds a sac fly for his 2nd RBI of the night in a 2-run 5th. Lyles pitches into the 7th, he allows a sac fly to Kurt Suzuki in the 7th, the lone run allowed on the evening, he gives up 5 hits, strikes out 4 & walks 2. Orioles starters have allowed 1 run or fewer 15 times in their last 20 games & their ERA is 2.46 in that span. Former Oriole, Jonathan Villar has 2 hits for the Angels in the loss. Jorge Lopez works the 9th & gets back on track to close it out after back-to-back blown saves in Minnesota. This is the first meeting between Father, Phil Nevin – the current acting manager of the Angels, who is serving a 10-game suspension for his part in a bench clearing brawl against Seattle on June 26 & Son, Tyler – who was not in the Orioles starting lineup buy the 2 hope to compete against each other when Nevin returns in Game 3. Los Angeles falls to 1-5 on their current 9-game road trip, they are 11-32 since May 25 & have lost 4 out of 5 to the Orioles this season. Baltimore has now won a season-high 5 in a row, they have climbed within reach of .500, as well as in contention for a Wild Card spot in the American League. 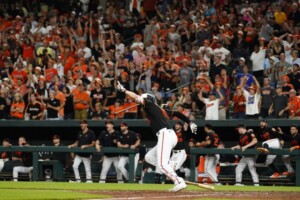 Game 2 : Orioles 5, Angels 4 – Trey Mancini singles home the game winning run in a 3-run 9th inning as the O’s rally to come from behind for their 6th win in a row & 8th walk-off win of the season as they remain undefeated on their current homestand & continue to ride a wave of confidence. Mike Trout hits a 3-run shot in the 3rd off of O’s starter Tyler Wells, who allows 3 runs on 6 hits in 4 innings, he strikes out 3 & walks 2. Trout has 3 hits & steals a base on the 11th anniversary of his major-league debut. Angels starter Reid Detmers is stellar all night long, he pitches 6 shutout innings, strikes out 7 & walks 1 as he dominates the O’s for most of the evening before departing after 6. Ramon Urias singles to score Austin Hays against reliever Jose Quijada in the 7th & Ryan Mountcastle singles to score Cedric Mullins in the 8th against Ryan Tepera, cutting the lead to 1. Shohei Ohtani hits a solo blast off of Dillon Tate in the 9th, he has 3 hits as well to join his fellow All-Star Trout as the Angels add a huge insurance run but it wouldn’t matter to the O’s, who pull off another walk-off win in their last at bat. Down to their last strike 3 times in a row, they put together 3 consecutive hits against closer Rasiel Iglesias w/ 2 outs as Adley Rutschman doubles home Rougned Odor & scores on a single by Mullins, who takes 2nd on the throw home & scores on a single by Trey Mancini as the O’s walk it off & send Camden Yards into a frenzy. Los Angeles is a major-league worst 11-29 since May 25 & has lost 6 of their last 7. Baltimore wins it’s season-high 6th in a row for the first time since 2020 & will look to win the Series in Game 3, they are 5-1 against the Angels this season. 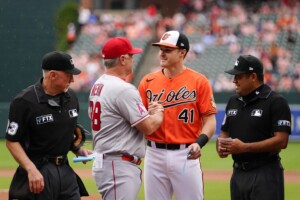 Game 3 : Orioles 1, Angels 0 – Dean Kremer combines w/ 4 relievers on a 5-hitter as the Orioles pitch their 7th shutout & win their 7th in a row for the first time since 2017. Ryan Mountcastle singles in the 4th, moves to 2nd on a wild pitch by Angels starter Patrick Sandoval & scores on a single by Anthony Santander who has 2 hits in the game. It’s the lone run allowed by Sandoval who gives up just 5 hits in 6 1/3 innings, strikes out 10 & walks 2, he has given up 3 runs or fewer in 10 12 of 14 starts this season. Kremer allows 2 hits & walks 3 in 5 innings, he ties a career-high w/ 7 strikeouts & has pitched shutout ball in 4 of his last 5 starts. Bruce Zimmerman, Joey Krehbiel & Felix Bautista each pitch an inning & Jorge Lopez closes it out in the 9th for the save. Angels manager & Father of Orioles 3B Tyler Nevin returns from his 10-game suspension to manage against his son, Nevin was suspended for his part in a benches clearing brawl against Seattle on June 26. Trey Mancini singles in the 5th, he has now hit safely in 16 consecutive starts since June 21. Los Angeles is now 1-7 on their current 9-game road trip & has now lost 7 of their last 8, they have scored just 14 runs in their last 8 games. Baltimore is now 28-20 after starting the season 14-24 & is 31-2 when leading after 9 innings. 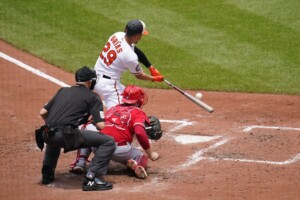 Game 4 : Orioles 9, Angels 5 – The Orioles use consecutive 4-run innings & get 3 RBI’s from Ramon Urias as steamroll their way to 8 wins in a row for the first time since 2005 & pull of their first 4-game sweep of the Angels since 2003. Monte Harrison hits a 2-run shot off of O’s starter Austin Voth in the 3rd to give Los Angeles the early lead but it would be short lived as the O’s score 4 times in the 4th & 4 times in the 5th to break the game wide open. Ryan Mountcastle doubles home Trey Mancini & scores along w/ Anthony Santander on a 2-run single by Urias & Rougned Odor singles to score Adley Rutschman as the O’s beat up on Angels starter Jose Suarez. The lefty goes 3 2/3, allows 4 runs on 3 hits, walks 2 & strikes out 1, he retires the first 10 batters before the wheels fall off & he departs in the 4th after the Odor single. Santander doubles home Mancini in the 5th, Mountcastle scores on a passed ball by Angels C Max Stassi, Santander scores on a wild pitch by reliever Elvis Peguero & Rutschman scores on a single by Urias, his 3rd RBI of the day. Voth goes 5 innings to earn the win, he allows 2 runs on 4 hits, strikes out 6 & walks none. Mancini singles to score Jorge Mateo off of reliever Jamie Barria in the 6th as the O’s add another as they would keep the pressure on Angels pitching all day. Harrison singles off of Bryan Baker to score Luis Rengifo in the 7th for his 2nd hit & 3rd RBI of the game & Stassi makes up for his passed ball w/ a 2-run shot off of Rico Garcia in the 8th but the Angels can get no closer. Los Angeles finishes up their dreadful road trip 1-8 as they continue to free fall, they are a major-league worst 11-31 since May 25th. Baltimore finishes 7-0 on their homestand, pulling off back to back sweeps & winning 8 games in a row for the first time since 2005. They are 29-14 since starting the season 14-24.

Baltimore goes undefeated on the 7-game homestand & will now head to Chicago to play the Cubs for 2 as they look to go for 9 or dare we say 10 in a row before a huge test against the Rays in Tampa for 3 before the All-Star Break.
⚾️⚾️⚾️
GO O’S!!
#OriolesMagic

How Sweep It Is Sweeps Week