The Orioles sweep the short 2-game Series w/ the Cubs in Chicago, their third Series sweep in a row, as they rally from a 2-run defecit in Game 1 & cruise to a win in Game 2, increasing their record setting winning streak to 10 in a row in a row in the process. 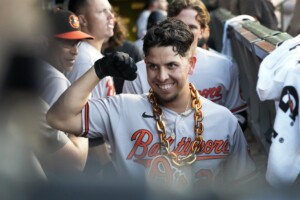 Game 1 : Orioles 4, Cubs 2 – Ramon Urias hits a 2-run shot & Jorge Mateo also goes deep to lead the O’s to their 9th win in a row as they reach .500 for the 1st time this season & reach their longest winning streak since 1999. Ian Happ hits a solo shot off of O’s starter, Jordan Lyles in the 1st & Alfonso Rivas singles to score Nico Hoerner in the 2nd against Lyles but the veteran buckles down from there. He pitches 7 innings of 2-run ball, allows 2 runs on 7 hits, strikes out 5 & walks 1 as he wins his 3rd consecutive start & continues to give the O’s pitching staff quality outings by eating up innings. Anthony Santander singles to score Cedric Mullins in the 3rd against Chicago starter Adrian Sampson who allows 3 runs on 6 hits, strikes out 3 & walks 2 in 5 1/3 innings. Urias hits a 2-run shot to put the Birds ahead for good off of Sampson in the 4th, he has 3 hits & scores a run & Mateo adds a solo shot off of reliever Brandon Hughes in the 7th to add an insurance run for the bullpen as Cionel Perez works the 8th & the O’s lone All-Star, Jorge Lopez works the 9th for his 17th save in 21 chances. Chicago has now lost 5 in a row & all 3 games against the Orioles this season. Baltimore is the 2nd team in major-league team in history to lose 110 games one season & have at least a 10-game winning streak the following year. They are 30-20 since starting the season 14-24. 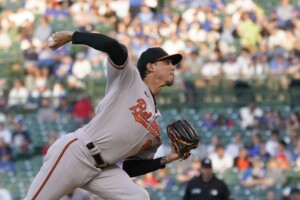 Game 2 : Orioles 7, Cubs 1 – The Orioles score 3 times in the 1st & never look back as they cruise to their 10th victory in a row & their longest winning streak in 22 years & get past the .500 mark for the first time since April of last season. Anthony Santander gets it started early as he doubles to score Cedric Mullins & Ryan Mountcastle then scores on a single by Austin Hays as Cubs starter Justin Steele is roughed up for 3 runs on 6 hits, he strikes out 3 & walks 1 in 6 innings of work but he does retire the last 11 batters he faces. Trey Mancini doubles to score Rougned Odor in the 2nd but Rafael Ortega’s sac fly scores Christopher Morel to get the Cubs on the board against O’s starter Spenser Watkins who tosses 5 innings to earn his 3rd win in his last in his last 4 starts. He is 3-0 w/ a 1.19 ERA since being recalled from Triple-A Norfolk on June 25. The Orioles add 3 runs w/ 2 outs in the 8th as Adley Rutschman doubles to score Austin Hays & scores on a single by Ramon Odor, then Ramon Urias scores on a balk by Daniel Norris who is charged w/ all 3 runs. Dillon Tate, Cionel Perez, Joey Krehbiel & Bryan Baker combine to pitch the last 4 innings of shutout ball to close it out. Chicago has now lost 6 in a row, their longest streak since losing 10 in a row from June 4-16. Baltimore has won 10 in a row for the first time since they won 13 in a row from Sept 7-22, 1999. They are 3-0 against the Cubs this season & are now 31-20 since a 14-24 start. They are just 2 games back in the AL Wild Card behind Division Rivals, Boston, Tampa Bay & Toronto.

Baltimore has now swept their last 3 Series & won 10 in a row for the first time in 22 years but now they get a real test as they will head down to St. Petersburg to play the Rays for 3 before the All-Star Break w/ a chance to make a push in the AL Wild Card race.
⚾️⚾️⚾️
GO O’S!!
#GoingStreaking