The Orioles carry a 10-game winning streak into Tampa & see the streak come to an end as they lose 2 out of 3 in respectable fashion but still take a .500 record into the All-Star Break as they prepare for the stretch run of the 2nd half. 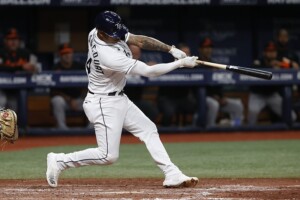 Game 1 : Rays 5, Orioles 4 – The O’s 10-game winning streak comes to an end as the Rays get a clutch pinch-hit 2-run homer from Christian Bethancourt & 5+ innings of solid relief from their bullpen to take the opener @ home. Trey Mancini hits a solo shot in the 3rd & Ramon Urias launches one in the 4th off of Rays starter Luis Patino as the Birds grab the early lead but the Rays would rally against O’s starter Tyler Wells. Wells goes 5 2/3 innings, allows 3 runs on 6 hits, strikes out 6 & walks 2, he loses for the first time in his last 9 starts since May 25th. Yu Chang doubles to score Isaac Paredes in the 4th & the Rays get 4-straight extra-base hits w/ 2 outs in the 6th as Josh Lowe doubles & scores on a double by Yu Chang who scores on a double by Francisco Mejia off of reliever Cionel Perez as the Rays take the lead for good. Newly acquired Christian Bethancourt hits a pinch-hit, 2-run shot off the foul pole in left (it is reviewed & ruled a HR) against the normally lock down lefty Perez, it’s his 1st HR as a Ray & puts Tampa Bay back up by 3 but back come the O’s as Urias goes deep for the 2nd time, a 2-run shot off of reliever Colin Poche to cut the lead to 1. Urias has 2 HR’s, the first multi-homer game of his career, he drives in 3 & scores twice as he helps the Birds continue their comeback ways but the rally falls short as Brooks Raley, the 5th Rays reliever of the night closes it out in the 9th for the save. The Orioles leave the bases loaded in the 1st & 5th innings as they had multiple opportunities to push across more runs but lose their 10th in a row @ Tropicana Field. Baltimore loses for the first time in their last 11 games & their 10-game winning streak was the teams longest since winning 13 in a row in 1999. Tampa Bay has now won 7 of their last 11 games, is 10-0 against the Orioles @ home & still has control of the 1st Wild Card spot in the AL. 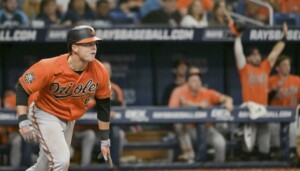 Game 2 : Orioles 6, Rays 4 (11 innings) – Adley Rutschman hits a pinch-hit homer to tie the game in the 8th, adds a sac fly to tie it in the 10th & Ryan Mountcastle delivers a clutch 2-out, 2-run single in the 11th to put the O’s ahead for good as they finally put away the Rays & get back in the win column following a loss to snap their 10-game winning streak in Game 1. Brandon Lowe scores on a wild pitch by O’s starter Dean Kremer in the 1st but Ramon Urias doubles to score Anthony Santander in the 2nd as the O’s come right back to tie the game against Rays starter Ryan Yarbrough, just recalled from Triple-A Durham. Lowe scores on another wild pitch by Kremer & Randy Arozorena hits a solo shot as the Rays take the lead back in the 3rd – Kremer goes 4 innings, allows 3 runs on 8 hits, strikes out 2 & walks none. Tyler Nevin singles to score Ramon Urias in the 5th to cut the lead to 1 against Yarbrough, who goes 5 1/3 innings, allows 2 runs on 5 hits, strikes out 4 & walks none – Rutschman pinch-hits for Nevin in the 8th & launches his first pinch-hit home run to tie the game against reliever Jason Adam to lead off the 8th. He then adds a sac fly to score Austin Hays in the 10th as the O’s take the lead against Colin Poche but Tampa Bay ties it again when Brett Phillips sacrifices Lowe to 3rd & Ji-Man Choi singles him home off of closer Jorge Lopez. Ryan Mountcastle comes up big in the 11th as his 2-out, bloop single scores Jorge Mateo & Cedric Mullins, giving the O’s the lead again but this time for good. Cionel Perez gets 2 outs but allows a walk & Joey Krehbiel records the final out w/ 2 on for his first career save as the O’s finally put the Rays away & finally get a win in Tampa. The Rays go 1-11 w/ men in scoring position through 9 innings, they end up 2-15 & leave 10 men on base in the game. Lowe goes 2-4 w/ a walk & 2 runs scored in his first game back since May 16th. Tampa Bay is 7-5 in their last 12 games & 10-1 in their last 11 games @ home against the Orioles. Baltimore snaps a 10-game losing streak @ Tropicana Field & has now won 10 of thier last 11, they are now 32-21 since starting the season 14-24 & remain in the hunt for the AL Wild Card. 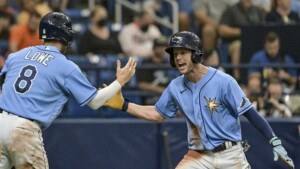 Game 3 : Rays 7, Orioles 5 – The Rays score 6 times in the first 3 innings, 7 times in the first 6 & homer 3 times but still have to survive an Orioles rally to hang on & win the Series @ home. Randy Arozorena hits a 2-run shot in the 1st, Brandon Lowe doubles to score Brett Phillips in the 2nd & Phillips drills a 3-run homer in the 3rd as the Rays ambush O’s starter Jordan Lyles & he departs in the 3rd after he allows 6 runs on 6 hits, strikes out 5 & walks 2 in just 2 2/3 innings. Bryan Baker replaces Lyles & strikes out all 5 batters that he faces, becoming the 8th pitcher to go an 1 2/3 innings or more & record all 5 outs via the strikeout. Adley Rutschman singles to score Anthony Santander, Ramon Urias singles to score Ryan Mountcastle in the 4th against Rays starter Corey Kluber & Roughed Odor launches a 2-run shot in the 6th as the O’s cut it to 2. Kluber goes 6 innings, allows 4 runs on 8 hits, strikes out 3 & walks 1 to win his 3rd consecutive start, it’s the first time he has won 3 starts in a row since May 30 – June 10, 2018. Francisco Mejia hits a solo shot off of reliever Keegan Akin in the 6th as the Rays add an insurance run but Austin Hays hits a solo shot off of Pete Fairbanks on the relievers first pitch of the season in the 8th before Jason Adam closes it out in the 9th. Baltimore has still won 11 of their last 13 & heads into the All-Star Break w/ a .500 record & are only 3.5 games back in the AL Wild Card but they are also just 1-11 in their last 12 games @ Tropicana Field. Tampa Bay is 8-5 in their last 13 games & heads into the All-Star Break .5 game up on Seattle for the top AL Wild Card spot.

Baltimore loses 2 out of 3 in this Series but fights valiantly even though there are no moral victories. They have 4 days off for the All-Star Break before resuming action in a 7- game homestand starting on Friday against the Yankees.
⚾️⚾️⚾️
GO O’S!!
#BreakingEven