The Orioles resume the 2nd half of the season as they open up a 7-game homestand by hosting the Yankees for 3 & while despite losing the Series, they show how close they are to becoming contenders in the American League.

Game 1 : Yankees 7, Orioles 6 – Aaron Judge homers twice to extend his major-league leading HR total, Joey Gallo also homers & the Yankees hold off a late Orioles rally to take the opener. Judge hits a 3-run shot off of O’s starter Tyler Wells in the 3rd but the O’s chip away as Jorge Mateo doubles to score Ramon Urias & scores on a single by Cedric Mullins in a 2-run Orioles against Yankees starter Jameson Taillon who allows 2 runs on 4 hits, strikes out 2 & walks 3 in just 2 2/3 innings of work, his shortest outing this season. Back to back doubles w/ 1 out by Josh Donaldson & Jose Trevino in the 4th against Wells who had 3 runs or fewer in 17 consecutive starts, which was the second-longest active streak in the majors next to Shane McClanahan of Tampa Bay (22). Judge hits a solo shot in the 5th to add another, the HR travels 465 feet, tied for the 3rd longest HR in the history of Camden Yards, he has now homered 6 times in his last 7 games. Isiah Kiner-Falefa singles to score Josh Donaldson against reliever Joey Krehbiel in the 6th as the Yankees add another but the O’s get 1 back in the bottom of the inning as Ramon Urias grounds out to score Austin Hays against reliever Jonathan Loaisiga Joey Gallo hits a solo shot off of Krehbiel in the 7th but Anthony Santander hits a 3-run shot off of Aroldis Chapman to cut the lead to 1. Clay Holmes closes it out in the 9th for the save. New York wins for just the 6th time in their last 13 games, they still hold the best record in the majors. Baltimore is still 11-3 in their last 14 games & 4.5 games out in the AL Wild Card race. 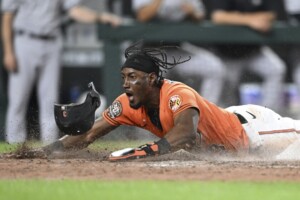 Game 2 : Orioles 6, Yankees 3 – The Orioles score 6 unanswered runs against Gerrit Cole & the Yankee bullpen as Ramon Urias has 3 hits, including a homer, drives in 2 & scores twice as the O’s even the Series against their AL East rival. Aaron Judge hits a solo shot in the 1st off of O’s starter Jordan Lyles – his 6th HR in his last 8 games & his 3rd HR of this Series alone as the Yankees take the early lead. Matt Carpenter adds a solo shot off of Lyles in the 2nd & Aaron Judge singles home Isiah Kiner-Falefa in the 4th, his 2nd RBI of the game as the Yankees add on to their lead against Lyles – Judge ties a career-high w/ 4 hits & 2 drives in 2. Cedric Mullins singles to score Jorge Mateo & scores on a double by Adley Rutschman in a 2-run 5th against Cole & Mateo takes over the game w/ his speed in the 7th as he singles to score Ramon Urias, moves to 3rd on a pick off error by reliever Albert Abreu & scores on sac fly by Mullins as the Orioles take the lead for good & never look back. Cole goes 6 innings, allows 4 runs on 9 hits, strikes out 6 & walks 2 as he fails to hold an early 3-run lead. Urias adds a 2-run shot off reliever Shane Greene who makes his first appearance in a Yankees uniform since 2014 after being called up from Triple-A Scranton / Wilkes Barre. Urias goes 3-4 & 6 multi-hit games since being reinstated from the IL on July 4. Cionel Perez works a scoreless 7th, Felix Bautista works a scoreless 8th despite walking 2 & Jorge Lopez closes it out for his 18th save in 22 chances despite the first 2 hitters reaching as the Yankees go 1-14 w/ runners in scoring position. Baltimore is 12-3 in their last 15 games as they continue to stay in the race for an AL Wild Card spot. New York has now lost 3 of their last 4 & 8 of their last 12 in their poorest stretch of the season. 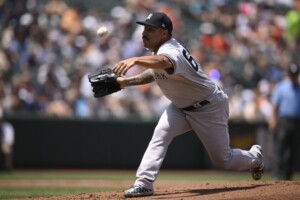 Game 3 : Yankees 6, Orioles 0 – Nestor Cortes tosses 6 shutout innings, Aaron Judge homers for the 7th time in his last 9 games & the Yankees shutout the Orioles to win the Series @ Camden Yards. D.J. Lemahieu doubles to score Jose Trevino & Aaron Judge cracks a solo shot off of O’s starter Dean Kremer in a 2-run 3rd inning for New York as Kremer goes 5 1/3 innings, he allows 4 runs on 5 hits, strikes out 6 & walks 1. Judge has homered 9 times in his last 12 games against the Orioles this season, he has 36 over his career & the Yankees have 166 HR’S as a team, the most they have ever hit after 96 games in Franchise history. Cortes allows 6 hits in shutout innings, he strikes out 7 & doesn’t walk a man. He is 2-0 w/ a 0.46 ERA in 4 appearances (3 starts) against the Orioles @ Camden Yards in his career – Clarke Schmidt works the final 3 innings for his career save. Isiah Kiner-Falefa singles to score Anthony Rizzo, extending his hitting streak to 12 games in a row & Jose Trevino has the first 4-hit game of his career, including a double to score Matt Carpenter against reliever Keegan Akin as the Yankees score twice in the 6th. Aaron Hicks singles to score Judge in the 9th against reliever Rico Garcia. New York has now won 9 of their last 13 games & 22 of 32 Series this season. They have won at least 66 of their first 97 games for the 10th time in Franchise history, they still have the best record in the AL despite falling a game behind the L.A. Dodgers for the best record in the majors. Baltimore is 12-4 in their last 16 but just 2-4 in their last 6 since winning 10 straight, they are now 4.5 games back in the AL Wild Card race.

Baltimore has now lost it’s last 2 Series after winning 10 straight, both to AL East opponents – Tampa Bay & New York. They will now host Tampa Bay for 4 to conclude the 7-game homestand before heading to Cincinnati for 3. This team continues to battle & finds themselves in the Wild Card hunt at the end of July for the first time in over 5 years.
⚾️⚾️⚾️
GO O’S!!
#KeepOnFighting