The Orioles finish 4-3 in a 7-game homestand w/ the Yankees & Rays as they
take 3 out of 4 from a banged up Tampa Bay team @ home to move within 3 games of a Wild Card spot in the AL. 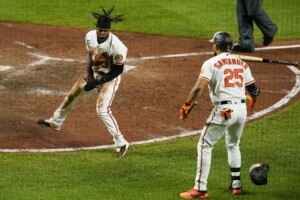 Game 1 : Orioles 5, Rays 1 – The O’s strong bullpen shines again pitching 6 scoreless to take over for starter Austin Voth as Ryan Mountcastle drives in 2 & scores a run & Ramon Urias collects 2 more hits as the O’s win the opener of the 4-game set. Roughed Odor’s sac fly scores Anthony Santander in the 2nd against Rays starter Corey Kluber to get the O’s on the board early but Brandon Lowe hits a solo shot off of Voth to lead off the 3rd & tie the game. The O’s break through w/ a 4-run 5th inning against Kluber, who allows 5 runs on 7 hits in 5 innings, he strikes out 2 & walks 1 before leaving after 5. Mountcastle singles to score Ryan McKenna & Cedric Mullins, breaking the tie to put the O’s ahead for good & Anthony Santander grounds to 1st but Ji-Man Choi’s throw hits Ryan Mountcastle in the back which allows Adley Rutschman to score & Austin Hays hits a sac fly to score Mountcastle & cap the scoring against Kluber. Choi’s error is rhe first error in 10 games for the Rays, tying a club record they last reached in 2011. Voth goes 3 innings, he allows 1 run on 4 hits in 3 innings, he strikes out 2 & walks 3, Bryan Baker pitches a scoreless 4th, Nick Vespi strikes out 4 in 1 2/3 innings to earn the win in relief after being called up from Triple-A Norfolk, Dillon Tate takes over in the 6th, Cionel Perez works the 1 1/3 to pitch into the 8th & Felix Bautista works a perfect 9th to close the game out. Tampa Bay leaves 10 men on base, including leaving 6 on in the first 2 innings & leaves the bases loaded in the 2nd but after that the Birds bullpen is lights out to shut the door on any rally. Baltimore is 13-6 in the month of July after going 14-12 in June, they hadn’t had a winning month since August 2017. Tampa Bay has now lost 3 in a row, is just 7-6 against Baltimore this season after going 18-1 last season & currently holds the third & final Wild Card spot in the AL. 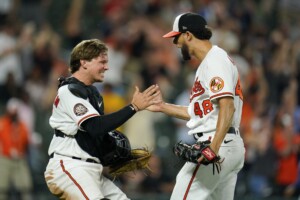 Game 2 : Orioles 5, Rays 3 – Ramon Urias hits a 2-run homer in the 8th to ruin an impressive outing by Rays starter Shane McClanahan as the O’s rally against the Rays bullpen to take the lead in the late innings, go on to win Game 2. Cedric Mullins takes the first pitch he sees from McClanahan out of the park for a solo homer as the Orioles grab the early lead but the Rays come right back as Randy Arozorena singles to score Yu Chang but is thrown out at 2nd trying to stretch it to a double against O’s starter Spenser Watkins who goes 5 1/3 innings, allows 3 runs on 10 hits, strikes out 4 & walks none. Isaac Paredes hits a solo shot in the 4th & Roman Quinn doubles to score Luke Raley but Anthony Santander hits a solo shot in the bottom of the 4th, the 2nd homer allowed by McClanahan in the game as the All-Star Game starter goes 7 innings, allows 2 runs on just 2 hits, strikes out 7 & walks only 1 – he has allowed 2 runs or fewer in a Franchise record 13 straight starts & has allowed 4 hits or less in 8 consecutive starts. Urias hits a 2-run shot off to put the O’s ahead for good & Trey Mancini hits a sac fly to score Jorge Mateo in a 3-run Orioles 8th against reliever Colin Poche, who allows 3 runs on 3 hits & walks 1 in just 1/3 of an inning. Joey Krehbiel goes 1 1/3 innings of relief after taking over in the 6th, Keegan Akin records the last out in the 8th & All-Star closer Jorge Lopez works the 9th for the save. Baltimore is now 14-6 in the month of July, their best month of the season, they are 3-2 on the current homestand & continue to remain in the hunt in the AL Wild Card race. Tampa Bay has now lost 4 in a row, while scoring just 9 runs in the process & is now 10-34 when scoring 3 runs or fewer this season, they are 7-7 against Baltimore after owning them last season to the tune of 18-1. 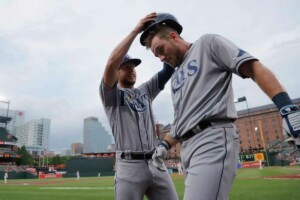 Game 3 : Rays 6, Orioles 4 (10 innings) – Randy Arozorena cracks a go-ahead 2-run double off of Orioles All-Star closer Jorge Lopez in the 10th to put the Rays ahead as they avoid a 4-game sweep @ Camden Yards & snap a 4-game losing streak. Ji-Man Choi hits a 2-run shot off of O’s starter Tyler Wells in the 1st & Luke Raley adds a solo shot in the 2nd off of Wells who allows 4 runs on 6 hits in 4 1/3 innings, he strikes out 5 & walks none but departs in the 5th w/ lower back discomfort & loses his 3rd straight start. Wells leads the team in wins, ranks second in innings pitched & is tied for the team lead w/ 20 starts. Rougned Odor singles to score Ryan Mountcastle in the 2nd & Adley Rutschman scores on a wild pitch by Rays starter Drew Rasmussen in the 3rd as the Birds cut it to 1. Josh Lowe doubles in the 5th & 1 batter later Wells is replaced by Dillon Tate who gives up a double to Yandy Diaz as the Rays tack on another. Trey Mancini snaps an 0-26 skid w/ an RBI single & Adley Rutschman scores on an errant throw by RF Luke Raley to cut the lead to 1. Rasmussen departs after hitting the next batter, Anthony Santander & is replaced by Ryan Thompson. He allows 3 runs but only 2 earned on 6 hits, he strikes out 4 & walks 1 in 4 2/3 innings on his 27th Birthday. Jorge Mateo hits a solo blast in the 9th off of reliever Colin Poche to tie the game & fire up all of Camden Yards but the O’s fail to capitalize as Poche strikes out Santander w/ 2 on in the 9th & the teams would play on to the 10th. Arozorena doubles w/ the bases loaded to score Taylor Walls & Yandy Diaz as the Rays take the lead for good off of Lopez who gets out of any further damage but it was already too late. Pete Fairbanks works a perfect 9th to close it out for the save. Tampa Bay is now 43-11 when scoring at least 4 runs & 10-34 when scoring 3 or fewer. They snap their 4-game losing streak & will look to pick up much needed split in the finale. Baltimore is 14-7 in the month of July, 7-8 against Tampa Bay this season & sits 4 games out in the AL Wild Card race. 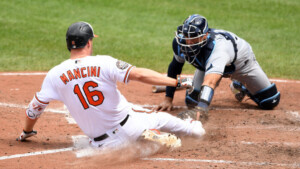 Game 4 : Orioles 3, Rays 0 – Trey Mancini hit an inside the park HR in what might of been his final game @ Camden Yards & on Mo Gaba day as the Orioles take 3 out of 4 from the Rays to win the Series & move closer to an AL Wild Card spot. Anthony Santander doubles off of Rays starter Ryan Yarbrough to score Austin Hays in the 3rd & break a scoreless tie, Yarbrough goes 6 innings, allows just a run on 4 hits, strikes out 8 & walks none. O’s starter Jordan Lyles pitches 5+ shutout innings, pitching 1 short of 6 complete as he allows just 3 hits, strikes out 4 & walks 4 – he departs w/ 2 out in the 6th as Cionel Perez strikes out Randy Arozorena to end the inning & Bryan Baker records the first 2 outs in the 8th & Felix Bautista strikes out Arozorena to end the inning. Mancini comes up w/ 1 out in the 8th & hits a fly ball to right off of reliever Shawn Armstrong that RF Josh Lowe loses in the sun & the ball hits him in the face, then rolls away. Austin Hays scores from 2nd after he doubles & Mancini comes all the way around & slides in to beat the throw as Camden Yards goes into a frenzy. Bautista strikes out 3 of the 4 batters he faces to earn his 3rd save. Baltimore puts together back-to-back winning months for the first time since 2016 & trails Tampa Bay by 3 games for the final Wild Card spot in the AL. Tampa Bay has lost 5 of their last 6 & are 8-8 against Baltimore this season after going 18-1 last season but still sits in the 3rd & final Wild Card spot.

Baltimore goes an impressive 4-3 in a 7-game homestand against New York & Tampa Bay, they pick up a huge win in a Game that would of moved them to 5 games back in the Wild Card w/ a loss. They now sit 3 games back as they head to Cincinnati for 3 before going to Texas. Things are getting very interesting for these Birds!
⚾️⚾️⚾️
GO O’S!!
#BullyingBack