The O’s head into Cincinnati on the heels of a winning homestand against the Yankees & Rays but run into a buzzsaw as they embarrassingly lose 2 out of 3 in Cincinnati to the Reds & lose some ground in the AL Wild Card race. 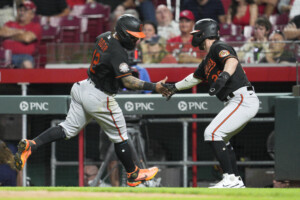 Game 1 : Orioles 6, Reds 2 – Kyle Bradish fans 7 in 5 innings & the O’s score 4 times in the 9th inning, including a Cedric Mullins 2-run go-ahead single as they take Game 1 in Cincinnati. Joey Votto hits a 2-run shot off Bradish in the 1st to give the Reds the early lead but the O’s starter settles down as he goes 4 scoreless the rest of the way, he allows 2 runs on 5 hits, strikes out 7 & walks none in his first start since June 18 after a stint in the IL w/ right shoulder inflammation. Anthony Santander hits a 2-run shot in the 6th off of Reds starter Mike Minor, it’s the 15th HR allowed by Minor in 10 starts this season. The lefty goes 5 1/3 innings, allows 2 runs on 4 hits, strikes out 4 & walks 3. Cedric Mullins singles home Ryan McKenna & Rougned Odor off of reliever Buck Farmer, Trey Mancini reaches on an infield single that scores Mullins & Ryan Mountcastle adds a sac fly to score Adley Rutschman as the O’s pound Farmer for 4 runs on 3 hits & 2 walks in just 1/3 of an inning. Joey Krehbiel, Cionel Perez & Dillon Tate combine to go 3 innings & Jorge Lopez takes over in the 9th to close it out. Baltimore now has 23 comeback wins, are 37-25 after starting the season 14-24, they are 2 games over .500 for the first time since September 2017. They are 16-7 in July & have assured themselves of consecutive winning months for the first time since May & June of 2016. Cincinnati is 10-8 in their last 18 & has is 5-2 in their last 7 games against AL East opponents. 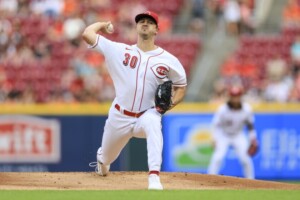 Game 2 : Reds 8, Orioles 2 – Cincinnati homers 3 times, Tyler Mahle pitches 6 strong innings & the Reds rebound from a loss in the opener to shock the Orioles & even the Series. Anthony Santander singles to score Adley Rutschman & Trey Mancini scores on a balk by Reds starter Tyler Mahle in a 2-run Orioles 1st but the Birds would never score again the rest of the way. Mahle settles down after that retiring the next 13 hitters that he faces over the next 5 innings, he allows 2 runs on 5 hits, strikes out 7 & walks none in a possible trade deadline audition. Michael Papierski singles to score Kyle Farmer in the 2nd against Orioles starter Dean Kremer but the inning ends when Anthony Santander throws out Jake Fraley trying to score on a fly ball from Jonathan India. Fraley singles to score Nick Senzel & scores on a 2-run shot by India in a 3-run Cincinnati 4th as the Reds take the lead for good. Joey Votto hits a solo shot off of Kremer & Fraley hits a 2-run blast off of reliever Beau Sulser in a 3-run 5th inning, it’s his first RBI since April 13 & capped off the first 3-hit game of his career. Kremer goes 4 1/3 innings, allows 6 runs on 10 hits, strikes out 3 & walks 1 – he had allowed 4 HR’s in 47 innings coming into this game but allowed 2 on the day, the Orioles haven’t had a starter go 6 innings since July 12. Brandon Drury singles to score India in the 6th off Sulser to add another & Cincinnati pitching retires 19 in a row at one point as Mahle & 3 relievers combine to close it out – Reiver Sanmartin, Ross Detwiler & Ryan Hendrix each work a scoreless inning in relief, of the 3, only Hendrix allows a hit.
Baltimore is still 37-26 after a 14-24 start & is still 16-8 in the month of July, they will look to win the Series in the finale. Cincinnati is 11-8 in their last 19 & 8-2 in their last 10 against the AL East. 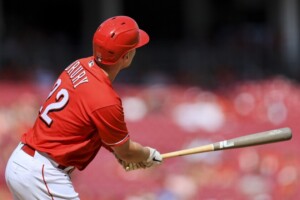 Game 3 : Reds 3, Orioles 2 – Brandon Drury homers to break a tie game in the 8th, reaching 20 HR’s for the first time in his career as the Reds stun the O’s to take the Series @ home. Joey Votto singles to score Jonathan India & Kyle Farmer hits a sac fly to score Donovan Solano in a 2-run Cincinnati 6th to break a scoreless tie against reliever Bryan Baker in relief of O’s starter Austin Voth who goes 4 shutout innings, he allows 5 hits, strikes out 6 & walks none. Reds starter Nick Lodolo goes 6 shutout innings, he allows 1 run on 4 hits, strikes out 7 & walks 2. Cedric Mullins hits a sac fly to score Ryan Mountcastle to get the O’s on the board in the 7th & Anthony Santander hits a solo shot off of reliever Alexis Diaz to tie the game in the 8th, extending his hitting-streak to 11, he has 3 hits in the game. Drury hits his team leading 20th homer off of Felix Bautista in relief to put Cincinnati ahead for good & Buck Farmer pitches the 9th to close it out for his 1st career save in 6 chances. Baltimore finished the month of July 16-9 to complete their 2nd straight winning month. They are 37-27 after a 14-24 start. Cincinnati goes 6-4 on their 10-game homestand, is 14-12 in July & 7-2 in their last 9 games against AL East opponents.

Baltimore starts out on the wrong foot of a 6-game homestand by losing 2 of 3 in Cincinnati but is still right in the thick of the Wild Card race. They now travel to Arlington to play the Rangers for 3 as the MLB trade deadline nears & the question lingers, are these Orioles buyers or sellers?
⚾️⚾️⚾️
GO O’S!!
#GutPunch