The Orioles head into Arlington coming off of a tough Series loss to the Reds & having to say Goodbye to teammates Trey Mancini & Jorge Lopez but despite an emotional few days they get right back to business & sweep the Rangers to move within 2 games of a Wild Card spot in the AL. 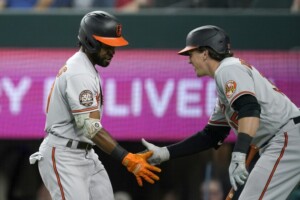 Game 1 : Orioles 7, Rangers 2 – Cedric Mullins homers to lead off the game, his 14th career leadoff HR & his 3rd leadoff homer of the season, Anthony Santander extends his hitting streak to 12 games & the Orioles win in their first game without Trey Mancini, extending their winning streak to 4 in a row over Texas in the process. Mullins leads off the game w/ the solo shot off of Rangers starter Jon Gray in the 1st & singles to score Rookie Terrin Vavra who led off the 2nd w/ an infield single for his first career hit, goes to 3rd on an RBI single by Anthony Santander that scores Jorge Mateo & scores on a single by Ryan Mountcastle in a 3-run 2nd against Gray. The right-hander leaves after just an inning & a 1/3 w/ discomfort on his left side, he allows 4 runs on 4 hits, strikes out 3 & walks 1. Adley Rutschman doubles to score Mullins in the 4th & scores on a single by Mountcastle as the Birds blow the game open against reliever Garrett Richards who gives up 2 runs on 4 hits in 3 innings of relief, he strikes out 2 & walks 1. Spenser Watkins pitches 6 strong, he allows 1 run on 5 hits, strikes out 5 & walks none – he gives up a solo homer to Corey Seager in the 6th, the only run allowed by Watkins on the night. Nick Solak hits a pinch-hit solo homer in the 8th for Texas off of reliever Keegan Akin who pitches 3 innings in relief to earn the save but this game was already in hand. Texas has lost 5 consecutive home games, matching their longest streak in Globe Life Field, which opened in 2020. They are just 5-7 since the All-Star Break & are starting to fade away in the AL Wild Card race. Baltimore is 17-7 in their last 24 games & 4-0 against Texas this season, they have moved up to 4th place in the AL East & remain right in the thick of the AL Wild Card. 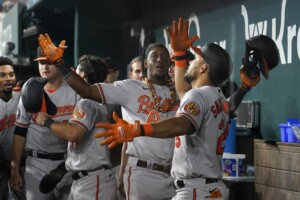 Game 2 : Orioles 8, Rangers 2 – Jorge Mateo homers twice, the first multi-homer game of his career & drives in 5 runs to set a career-high for homers & RBI’s as the Orioles take Game 2 of the Series to remain undefeated against the Rangers on the season. Rangers starter Spencer Howard retires the first 6 batters he faces but hits Ramon Urias leading off the 3rd & walks Rookie Tarrin Vavra before Mateo takes him deep in the 3rd to put the O’s ahead for good. Adley Rutschman hits a ground rule double to score Cedric Mullins & scores on a sac fly by Ryan Mountcastle to cap the scoring as the Birds erupt in the 3rd for 5 runs against Howard who allows 6 runs on 6 hits, strikes out 3 & walks 2 in 4 innings of work. Back to back doubles by Anthony Santander & Adley Rutschman to lead off 5th inning knocks Howard out of the game but Marcus Semien singles to score Meibrys Viloria & gets the Rangers on the board in the bottom of the 5th, it’s the only run allowed by Lyles on the night. The veteran pitches into the 7th inning, going 6 1/3, he allows 1 run on 7 hits, strikes out 7 & walks 1, he is relieved by Dillon Tate. Mateo hits his 2nd homer, a 2-run shot off of reliever Dennis Santana in the 9th for his 4th & 5th RBI’s of the game as the O’s pull away late to win their 2nd in a row @ Globe Life. Viloria hits a solo shot w/ 2 outs in the 9th off of Nick Vepsi (he goes 3-4 w/ a HR, an RBI & 2 runs scored) but Felix Bautista comes on to record the final out as he strikes out Leody Taveras to end the game. Texas is now 5-8 since the All-Star Break, 0-5 against the Orioles & have lost 6 games in a row @ home. Baltimore is 18-7 in their last 25 games & remains undefeated against Texas, they are 14-9 against the AL West this season, while sitting right in the thick of the AL Wild Card race while effectively ending any hopes the Rangers had of getting a Playoff spot. 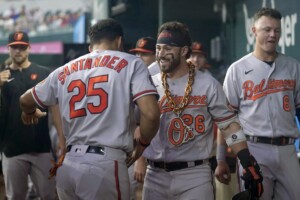 Game 3 : Orioles 6, Rangers 3 – Terrin Vavra hits the tiebreaking RBI double for his first career RBI after a disputed stolen base by Jorge Mateo & Kyle Bradish pitches 5 innings of 1 run ball as the Orioles pull off the season sweep of the Rangers to move a season-high 3 games over .500. Adolis Garcia singles to score Corey Seager in the 1st against O’s starter Kyle Bradish but the young right hander settles down the rest of the way & gets some help from his bats as Ryan McKenna hits a solo shot to tie it off of Rangers All-Star starter Martin Perez in the 2nd. Bradish allows just 1 run on 3 hits, in 5 innings, he strikes out 5 & walks 3 but gets a no decision as both starters duel all night. Perez allows 1 run on 5 hits, he strikes out 9 to match a career-high & walks 3 in 5 innings as well, setting the Franchise record for starts without a loss w/ 19 as he also earns the no decision. Robinson Chirinos hits a solo shot off of reliever Matt Moore in the 7th but the Rangers tie it when Jonah Heim hits a solo shot off of Dillon Tate in the bottom of the inning. Vavra pinch-hits for Tyler Nevin in the 8th & doubles to score Jorge Mateo who swipes 2nd controversially & scores on a single by Chironos, his 3rd hit of the night as the O’s add a huge insurance run. Anthony Santander pads the lead even more when he doubles to score Adley Rutschman in the 9th & scores on a wild pitch by reliever Jonathan Hernandez – Santander’s hit streak is now up to 14 games. Marcus Semien hits a solo shot off of Felix Bautista in the 9th but Bautista still closes it out for the save as the Orioles pull off their first ever season sweep of the Rangers. Texas loses it’s 7th in a row @ home & slides to a season-worst 12 games under .500, they are 5-9 since the All-Star Break & have now  swept in a Series of at least 3 games for the 4th time this season, all of them coming after the All-Star Break. Baltimore has won 19 of their last 26, has already won 2 more games then it did last season & is only 1.5 games back in the AL Wild Card race.

Baltimore is starting to heat up again as they have now won 3 in a row, have swept Texas for the 2nd time this season & moves a season-high 3 games over .500. They will now return home to host the Pittsburgh Pirates for 3 w/ a chance to increase their win total & gain some ground in the AL Wild Card race.
⚾️⚾️⚾️
GO O’S!!
#FootOnTheGas