Beatdown But Not Out

The Orioles lose 2 out of 3 to the Red Sox, including an absolute blowout in Game 2 & a shutout in the Series finale to finish up one of their worst homestands of the season, as they go 4-6 in the crucial 10-Games & see their Wild Card hopes start to fade away in the process. 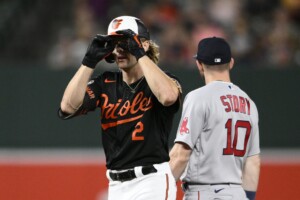 Game 1 : Orioles 3, Red Sox 2 – The O’s rally to score 3 times in the 6th as Gunnar Henderson has 2 hits in the game, including the go ahead 2-run single as the O’s take the lead for good & hold off the Red Sox to remain in the hunt in the final AL Wild Card spot. Xander Bogaerts hits a 2-run shot in the 3rd off of O’s starter Austin Voth to give Boston the lead early & Red Sox starter Brian Bello makes it stand up for the next 5+ inning. The Rookie is smooth all night, taking a shutout into the 6th for the 2nd straight start but things fall apart for him in that inning as Cedric Mullins singles w/ 1 out (1 of his 3 singles on the night) Adley Rutschman & Anthony Santander walk to load the bases as Bello departs as Kaleb Ort comes in. Cedric Mullins then scores on a wild pitch by Ort & Ryan Mountcastle walks w/ the bases loaded to cut the lead to 1 before Henderson singles to score Rutschman & Santander to give the O’s the lead for good. All 3 runs are charged to Bello, who goes 5 1/3 innings, allows 3 runs on 3 hits, strikes out 7 & walks 4. Voth goes 4 innings, allows 2 runs on 5 hits, strikes out 5 & walk 2. 5 relievers combine shutout the Red Sox the rest of the way as DL Hall & Jake Reed each go 1 1/3, Cionel Perez works 1/3, Bryan Baker goes 2/3 & Dillon Tate goes 1 1/3 to pick up the 4 out save. Bogaerts has 3 hits including his HR to raise his AL-leading batting average to .318 in the loss for the Red Sox. Boston has now lost 3 in a row is 7-9 in their 16 games as they continue to try to play spoiler w/ their season all but over. Baltimore wins for just the 4th time in their last 8 games but moves to within 4 games of Seattle for the the final Wild Card spot in the AL. 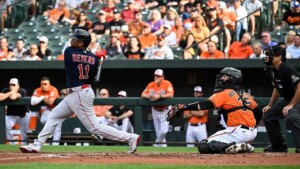 Game 2 : Red Sox 17, Orioles 4 – Rafael Devers connects for a Grand Slam before the Red Sox even make an out, Kike Hernandez collects 4 hits & the Red Sox absolutely punish the Orioles in Game 2 to even the Series & knock the O’s even further back in their race for an AL Wild Card spot. Devers takes O’s starter Jordan Lyles deep in the 1st after Lyles loads the bases on a walk, a single & a hit batter as the Red Sox ambush him & never let up. Cedric Mullins hits a solo shot off of Red Sox starter Michael Wacha in the 3rd but Boston puts the game away in the 4th, scoring 4 more times as Kevin Plawecki doubles to score Kike Hernandez & scores on a single by Verdugo who scores on a single by Devers & Trevor Story singles to score Xander Bogaerts. Lyles is rocked for 7 runs on 8 hits in 3 2/3 innings, strikes out 1 & walks 1 while losing his first start of the month due to an illness & loses for the 5th time in his last 7 outings. Christian Arroyo hits a 2-run shot off of reliever Keegan Akin in the 6th & after a sac fly by Jorge Mateo scores Gunnar Henderson & Mullins singles to score Ramon Urias in the bottom of the inning. Wacha goes 6 innings, allows 3 runs on 6 hits, strikes out 5 & walks none to earn his 11th win in a row. It is also his 4th start in a row w/ 6 innings pitched & between 2 & 4 runs allowed. Story singles home Abraham Almonte for his 3rd run of the night against newly acquired Yennier Cano on his 2nd hit of the game, 1 of 21 on the night for Boston. Ryan Mountcastle singles to score Ryan McKenna in the 8th against reliever Matt Strahm but Cano is shelled in the 9th as the Red Sox score 7 times – Almonte singles to score Kike Hernandez, Rookie Connor Wong reaches on an infield single that scores Kevin Plawecki, Story walks w/ the bases loaded to score Almonte, J.D. Martinez walks w/ the bases loaded to score Rookie Tristan Casas, Arroyo singles to score Wong & scores on a single by Hernandez as the 9th inning ends w/ OF Ryan McKenna on the mound recording the last 2 outs for Cano, who allows 7 runs on 6 hits, he strikes out 3 & walks 3. Boston snaps a 4-game losing streak, improves to 8-9 in their last 17 games & will look to win their first Series against the Orioles this season in the finale. Baltimore loses for the 5th time in their last 9 games & slips to 5 games back in the AL Wild Card race. 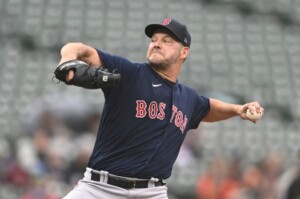 Game 3 : Red Sox 1, Orioles 0 – Rich Hill pitches 5 scoreless, Xander Bogaerts drives home the only run of the game on a sac fly & the Red Sox win their first Series of the season against the fading Orioles in a game delayed for an hour & 12 minutes by rain. Tommy Pham singles & steals 2nd against O’s starter Kyle Bradish in the 1st, goes to 3rd on a groundball by Alex Verdugo & scores on a sac fly by Bogaerts to put the Red Sox ahead. It would wind up being the only run of the game as O’s starter Kyle Bradish duels w/ Hill for most of the game. Hill, a former Oriole, pitches 5 scoreless innings, allows 2 hits, strikes out 7 & walks 3. He is now 4-1 w/ a 2.80 ERA in 18 career appearances against the Orioles. Bradish departs after 7, he allows just the 1 lone run on only 2 hits, strikes out 3 & walks 2 but becomes the hard luck loser. He has a 1.44 ERA over his last 4 starts & has lowered his ERA from 6.25 to 5.01 in that span. John Schrieber, Matt Strahm, Garrett Whitlock & Matt Barnes each pitch an inning of scoreless relief for Boston w/ Barnes picking up the save after a 1-2-3 9th, including getting Adley Rutschman to fly out as a pinch-hitter for the final out. The O’s have scored just 8 runs in their last 4 games & muster just 3 hits on the day while the Red Sox muster just 4, 1 day after pounding out 21 the night before. Baltimore goes 0-7 w/ runners in scoring position in one of thier biggest games of the season. They have now lost 8 of their last 10, all at home & are now 5 games out of the final AL Wild Card spot after being just 1.5 games out on September 4.

Baltimore loses 6 of 10 on a crucial homestand & are starting to watch their Playoff hopes fade away. They will now head to D.C. for a short 2-game set before heading up North to Toronto for the last time in what will be the BIGGEST Series of the season.
⚾️⚾️⚾️
GO O’S!!
#LifeSupport