The Orioles sweep the short, 2-game Series in D.C. from the lowly Nationals by coming from behind in both games as they continue to try to keep pace in the AL Wild Card race while reaching the 75 win mark for the first time in 5 years.

Game 1 : Orioles 4, Nationals 3 – Ryan Mountcastle homers off of his former roommate & former Oriole, Hunter Harvey after telling him he would do so over dinner the night before & the Orioles win a huge game that they had to have. Rookie, Gunnar Henderson singles back up the middle w/ 2 outs against Nationals starter Corey Abbott, it scores Adley Rutschman & gives the O’s the early lead. Luis Garcia doubles home Rookie, Joey Meneses in the bottom of the 1st against O’s starter Dean Kremer to tie it, Luke Voit singles to score Ildemaro Vargas & Garcia grounds out to score Lane Thomas as the Nats take the lead in a 2-run 3rd against Kremer. Abbott goes only 3 innings, he allows 2 runs on 5 hits, strikes out 3 & walks 2 but allows Austin Hays & Jorge Mateo to reach leading off the 4th before he is relieved by Harvey. Cedric Mullins grounds into a doubleplay scoring Hays to cut the lead to 1 & Mountcastle leads off the 5th w/ the solo shot off of Harvey to tie the game as Harvey smiles while Mountcastle rounds the bases & the 2 friends share a moment. Henderson doubles for the 2nd of his 2 hits & scores on a double by Hays that puts the Birds ahead for good & knocks Harvey from the game. Kremer goes 5+ innings, allows 3 runs on 8 hits, strikes out 1 & walks 1 to earn the win Dillon Tate works an inning & 1/3, Cionel Perez goes 1 2 /3 & Felix Bautista works around a lead off walk in the 9th to close the game out & pick up his 13th save in 14 tries. He has retired 33 of the 38 hitters he has faced since giving up a HR to Boston’s Xander Bogaerts on August 21. Baltimore wins for just the 5th time in it’s last 11 games & is now 5 games back of Tampa Bay for the 3rd & final AL Wild Card spot. Washington has lost 4 in a row & 6 of their last 7 to fall a season-high 44 games below .500 & has the league’s worst record. 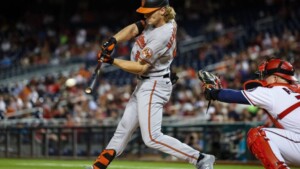 Game 2 : Orioles 6, Nationals 2 – Rookie, Gunnar Henderson drives in a career-high 4 runs, Jorge Mateo homers & the Orioles rally to take care of business in the nation’s capital as they sweep the 2-game Series from the Nationals & gain some ground in the AL Wild Card race. Henderson grounds to 3rd in the 2nd against Washington starter Patrick Corbin to score Ramon Urias as the O’s take the lead after 3 straight singles to lead off the inning w/ nobody out but disappointingly come away w/ just 1 run against the veteran southpaw. Riley Adams & Luke Voit each hit solo homers in the 3rd & 4th innings against O’s starter Tyler Wells as the Nats take the lead for the second night in a row. Wells allows 2 runs on 2 hits in 4 innings of work, as both longballs accounts for all of Washington’s runs, he strikes out 4 & walks none. Corbin goes 6 innings, allows just 1 run on 4 hits, strikes out 4 & walks none. Henderson triples to score pinch-runner, Terrin Vavra & pinch-hitter, Cedric Mullins against reliever Mason Thompson in the 7th & comes all the way around to score after LF Luis Garcia, playing LF for just the 4th time in his 10-year career, loses his grip on the throw & drops the ball as the O’s take the lead for good on Henderson’s Little League HR. Jorge Mateo takes the next pitch over the wall in left as the O’s increase the lead to 4 in the blink of an eye against Thompson who allows 4 runs on 4 hits & walks 1 in just 1/3 of an inning. Henderson adds a double to score Mullins for his 4th RBI of the night in the 8th against reliever Paolo Espino who gives up 3 hits & strikes out 2 in an inning of work. The Orioles use 5 relievers as DL Hall, Austin Voth, Cionel Perez, Jake Reed & Bryan Baker each go an inning in relief of Wells to close it out & complete the sweep, including a perfect 9th from Baker. Baltimore is now 6-6 in it’s last 12 games & pulls within 4 games of Tampa Bay for the final AL Wild Card spot. Washington goes 0-5 w/ runners in scoring position in this game & has now lost 5 in a row & 7 of their last 8. They are now 45 games under .500 & own the majors worst record in the league,

Baltimore now has Thursday off as they head up to Canada one last time this season for 3 w/ the Blue Jays while trailing AL East rival Toronto by 5.5 games. They also now trail fellow AL East rival Tampa Bay by 4 as they look to find any avenue they can to the Postseason.
⚾️⚾️⚾️
GO O’S!
#StillFighting

Beatdown But Not Out Week 2 – Ravens Recap & Grades