The Orioles head up to Toronto in need of a Series win but lose 2 out of 3, salvaging the finale to avoid the sweep but lose crucial ground in the Playoff race as time starts to run out on their Postseason hopes. 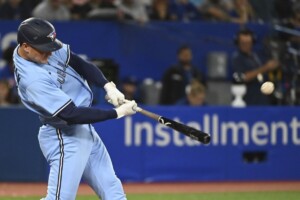 Game 1 : Blue Jays 6, Orioles 3 – Matt Chapman homers twice, George Springer adds a 3-run shot & the Blue Jays hold their position AL Wild Card race as they take the opener to increase their lead to 5.5 games after their AL-leading 39th comeback win.
Chapman goes 3-4 w/ 3 RBI as he cracks a solo shot in the 2nd off of O’s starter Jordan Lyles, his first since August 20, ending a season long 25-game drought. It is the 10th multi-homer game of his career. Adley Rutschman’s 2-run shot off of Jays reliever Yusei Kikuchi gives the O’s the lead in the 4th – his first career HR off a lefty. Kikuchi goes 2 innings, allows 2 runs on 2 hits, strikes out 4 & walks none in relief of opener Trevor Richards who strikes out the side in the 1st & reliever Julian Merryweather who goes 2 innings & Tim Mayza, Adam Cimber & Anthony Bass each pitch a scoreless inning in relief. Springer drills a 2-out, full count into the second deck, a 3-run shot in the 5th off of Lyles, who allows 4 runs on 5 hits, strikes out 5 & walks 1 & Chapman adds a 2-run shot in the 6th off of reliever Joey Krehbiel to put the Jays up 4. Rookie, Gunnar Henderson drills a solo shot in the 9th off of Yimi Garcia to cut the lead to 3 but the O’s can get no closer. Toronto is now 12-4 in the month of September & improves to 34-17 when hitting 2 or more HR runs in a game this season, they also move to 1 1/2 games on front of Tampa Bay in the AL Wild Card race. Baltimore finishes w/ just 3 hits & is unable to gain any ground on all 3 teams sitting in front of them – Toronto, Tampa Bay & Seattle & falls to 1-5 in their last 6 games against the Blue Jays, who they have split 14 meetings w/ this season. 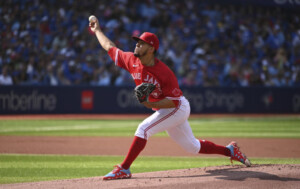 Game 2 : Blue Jays 6, Orioles 3 – Ramiel Tapia hits a 3-run double, George Springer has 2 hits & 2 RBI & Jose Berrios pitches 6 innings to remain unbeaten against the O’s & the Blue Jays put a stranglehold on their Playoff position as they win the Series. Matt Chapman drives in his 4th run in 3 days w/ a sac fly to score George Springer off of O’s starter Kyle Bradish in the 1st & Springer doubles to score Santiago Espinal & Cavan Biggio in the 2nd as the Jays give Berrios some run support. Rookie, Gunnar Henderson singles to score Cedric Mullins & Anthony Santander in a 2-run O’s 2nd against Berrios, Henderson’s 2nd & 3rd RBI’s in the last 2 games. It would be the only runs allowed by Berrios on the day as he pitches 6 innings, allows 2 runs on 7 hits, strikes out 3 & walks 2 to win his 3rd straight decision. He is 8-0 w/ a 3.04 ERA in in 11 career starts against Baltimore. Toronto puts 2 on w/ 2 out against Bradish on an error & a walk & reliever Jake Reed walks Teoscar Hernandez to load the bases before Tapia clears them w/ a double down the line in right to score Vladimir Guerrero Jr., Teoscar Hernandez & Chapman & give the Jays a 4-run lead. Bradish goes 4 2/3, he allows 5 runs on 6 hits, strikes out 3 & walks 1 in his 2nd straight loss. Terrin Vavra singles to score Henderson in the 8th against reliever Yimi Garcia to cut the lead on half but Jordan Romano closes it out in the 9th as the Jays take the Series. Toronto is now 13-4 in the month of September & have now won 6 of their last 7. Baltimore has lost 6 of their last 7 against Toronto after winning 6 of their first 8 earlier in the season & are now 5.5 games behind Toronto for the final AL Wild Card spot w/ only 4 games left to play against the Blue Jays. 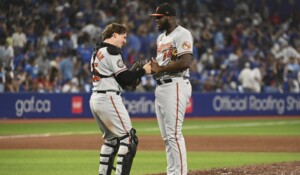 Game 3 : Orioles 5, Blue Jays 4 – Adley Rutschman singles home 2 runs in the 9th, the Orioles turn their 15th triple play in team history & beat the Blue Jays in the finale to avoid the sweep & pick up a much needed game in the AL Wild Card race. Bo Bichette singles to score Springer in the 3rd against O’s starter Dean Kremer but Jorge Mateo doubles to score Terrin Vavra against Jays starter Alek Manoah to tie the game in the 4th. Danny Jansen hits a solo shot off of Kremer in the bottom of the inning to give Toronto the lead back & Vladimir Guerrero Jr. hits a solo blast off of reliever Dillon Tate to push the Jays lead to 2. Kremer goes 5 2/3 innings, allows 2 runs on 4 hits, strikes out 3 & walks 5 on the day & benefits from a huge triple play to get him out of a jam in the 3rd, the first O’s triple play since August 3, 2017 against Detroit. Manoah goes 6 innings, allows 1 run on 4 hits, strikes out 5 & walks 4 – he was 3-1 2/ a 3.07 ERA in 7 career games against Baltimore. Jesus Aguilar hits a solo blast off of reliever Adam Cimber in the 8th to cut the lead to 1 & Rutschman delivers w/ the clutch, bases loaded single to score Rookie, Kyle Stowers, Ramon Urias as the Birds take the lead for good in the 9th. Aguilar singles home Cedric Mullins to add a huge insurance run as Jays closer Jordan Romano is tagged for 3 runs, 4 hits & 2 walks, the first time he has allowed a run in 15 appearances. Joey Krehbiel pitches a pefect 8th to pick up the win & Felix Bautista picks up his 14th save in 15 chances despite George Springer’s RBI double to score Cavan Biggio which cuts the lead to 1 in the bottom of the 9th.
Baltimore wins for just the 2nd time in their last 8 games against Toronto & has it’s highest win total since finishing 89-73 in 2016 as a Wild Card. Toronto is 6-2 in their last 8 games against Baltimore & sits atop the Playoff race as the top Wild Card seed.

Baltimore avoids the sweep but fails to handle their own business 7& will now need some help along the way if they have Playoff aspirations. They have come so far & this season has been so beneficial to the young guys. Next up, Detroit for 3 in what will become a must win Series @ home.
⚾️⚾️⚾️
GO O’S!!
#TakingTheirLumps