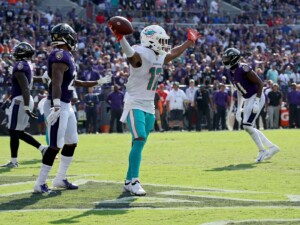 Offense – This group looked great early on, scoring 28 1st half points & scoring on 3 of their first 4 drives w/ the exception of a fumble by Lamar Jackson on the goal line. Then it sputters in the 2nd half as they are unable to run the ball all day, which allows Miami to get right back in the game & come back to win. They rush for 155 yards on the ground on 25 attempts, an average of 6.2 yards per carry. Jackson leads the way w/ 119 yards on 9 rushes, an average of 13.2 yards per carry, including a 79 yard run for a TD, while rushing for 100 yards for the 11th time in his career to pass Michael Vick for the most all time. He also passes for 318 yards & 3 TD’s, becoming the first QB in NFL history to pass & run for TD’s of 75+ in the same game. Rashod Bateman hauls in 4 receptions for 108 yards, an average of 27.0 yards per reception, including a 75 yard catch & run for a TD & Mark Andrews grabs 9 passes for 104 yards & a TD, an average of 11.6 yards per catch. The Offensive line is once again decent but not great as Lamar isn’t sacked once on the day, great improvement from last season when he seemed to be sacked almost every game. While they were great in pass protection, the run blocking left a lot to be desired, they continue to struggle opening up running lanes & are getting beat at the line of scrimmage way too much. Patrick Mekari is playing well at LT but the need for a true LT is still clearly evident. A couple huge drops also played a part in this one as well as the lack of a running game was the main reason for the Dolphins comeback as the Defense was tired & this group failed to be able to kill the clock & close the game out. This team needs to get back to their real identity of running the football & dominating the time of possession but if the Offensive line struggles to run block like they have, it’s gonna be a long season for them.
Grade : B-

Defense – A tale of 2 halfs, this group that had been the trademark of the Ravens since they came into existence has taken a major step back in years past but it all came to a head in this game. They looked good in the 1st half, allowing just 7 points & shutting down the main Dolphins recievers, Tyreek Hill & Jalen Waddle, while taking care of business & getting spotted a 21 point lead. The 2nd half was absolutely abysmal, as they allow Hill & Waddle to run free time & time again & can’t stop anything through the air. They allow just 86 yards rushing on 18 carries, an average of 4.8 yards per carry as the Defensive line plays well all game, they are one of the lone bright spots on the day, sacking Tua once (Justin Houston) but not generating much pressure against a Miami line tat wasn’t even at full strength. The secondary forces him to throw 2 interceptions, both to FS Marcus Williams, who could of had a third that sealed the game but dropped it & the Dolphins scored on the same drive. However, that same secondary allows 469 yards through the air (Tua’s first career 400 yard passing game) & 6 TD’s, they allow 22 receptions for 361 yards & 4 TD’s to Hill & Waddle combined as this group just ran out of gas & couldn’t make the 1 final stop that they needed. Allowing 28 points in the 4th quarter is absolutely unacceptable & should NEVER happen to any team, let alone a team that used to pride itself on Defense although we can see that those days are long gone. Time to look in the mirror & figure some things out because this group is getting shredded like swiss cheese. Way too many deep balls allowed over their heads & way too many recievers getting behind the DB’s which means there was lots of miscommunication which was blatantly obvious & absolutely unaccaptable.
Grade : D-

Special Teams : Once again, a great performance by this unit as Devin Duvernay returns the opening kickoff 103 yards for a TD & totals 108 return yards on the day, also returning a punt for 5 yards. The kick coverage is solid all day as they allow just 26 yards total, 18 to TE Durham Smythe on a kick return & 8 to Devon Holland on a punt return. Justin Tucker connects on his only FG attempt from 51 yards out & Rookie P Jordan Stout punts it away 2 times for 81 yards, an average of 40.5 yards per punt. The coverage continues to be solid w/ a few new faces in the mix & guys learning how to play their parts, the injury to Josh Ross is huge as he was just carving out a niche for himself & will now have a setback to start his career. The return game is doing great, as well as the kicking game as both are led by Pro-Bowlers Devin Duvernay & Justin Tucker. This aspect has been the most consistent part of this team, year in & year out, some of the faces may change but the same results still occur. HC John Harbaugh’s expertise as a former ST coach have shown up when they need to & this group continues to shine no matter who is out there. The only aspect missing from this unit it is blocks but those are no easy task & players like Ed Reed no longer are around to help out & give that game changing aspect to this phase. Overall, a pretty solid around performance that was wasted in the loss as plays like Duvernay’s kick return to start the game & Tucker’s 51 yard FG to put the team ahead late go for not. This group remains the backbone of this team & the most consistent week in & week out.
Grade : B+

Coaching – This loss is absolutely on the entire coaching staff. They had this team ready from the beginning but there was a serious drop off in the 2nd half, they were all outclassed, outcoached & outschemed by the Miami staff. The Dolphins coaching staff made adjustments & the Ravens staff didn’t, simple & plain. Greg Roman is responsible for the lack of a run game which led to the Defense being tired, DC Mike McDonald’s NCAA scheme has been very ineffective so far against the pass & HC John Harbaugh is responsible for allowing them to continue doing the same thing without making any adjustments, they all 3 go hand in hand & played a factor in why Miami was allowed to come back. No adjustments were made, no creativity Offensively or Defensively to keep the opposition guessing & no leadership on the field. This team is in desperate need of leadership & guidance when they start reeling, too much youth out there w/ no one to show them the ropes, which falls on the coaching staff to do so. There will be lots of pressure on new DC Mike MacDonald to get it right Defensively & OC Greg Roman to finally open up a running game when his starters come back. The most pressure & responsibility will mainly fall on HC John Harbaugh to make sure his staff is able to make in game adjustments going forward. They got too comfortable w/ a 21 point lead & never kept the pressure on. The accountability has to fall on the HC because he is responsible for how his players & his staff perform. Things need to get fixed & they need to get fixed soon.
Grade: C-

Now a trip to Foxboro to play the Patriots for the 3rd time in the last 4 seasons.
🏈🏈🏈
GO RAVENS!!
#ChokeCity