The Orioles lose 2 out of 3 to the Tigers in a Series that they had to have, winning the finale to avoid the sweep & pick up their only win of the season against Detroit as their Playoff hopes start to slip away. 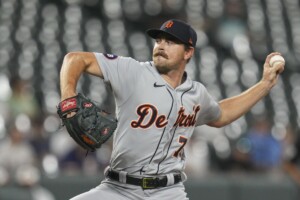 Game 1 : Tigers 11, Orioles 0 – Tyler Alexander tosses a No-Hitter into the 7th inning, Rookie Ryan Kriegler drives in 3 runs & the Tigers completely inialate the Orioles in the opener to play spoiler to Baltimore’s Playoff hopes & stun the home crowd. Miguel Cabrera gets it all started when he singles to score Javier Baez as the Tigers grab the lead in the 1st against O’s starter Tyler Wells & Cabrera singles to lead off the 4th, then scores on a bases loaded walk by Kriedler as Wells departs after 3 innings & allows 5 runs on 4 hits, strikes out 3 & walks 3. Spencer Torkelson scores on a wild pitch by Rookie reliever DL Hall, Akin Badoo singles to score Jonathan Schoop & Kriedler, then scores on a double by Rookie Riley Greene in a 5-run Detroit 4th inning to break the game wide open. Alexander allows just 2 baserunners over the first 6 innings, both on walks before Ryan Mountcastle singles in the 7th & Anthony Santander also singles but Alexander strands both runners. He ties a career-high w/ 7 innings pitched, allows just 2 hits, strikes out 4 & walks 2, he was winless in his last 4 starts since August 20. Will Vest works the 8th & Jose Cisnero closes it out in the 9th. Greene doubles home Kriedler in the 6th off of Jake Reed & Kriedler singles to score Spencer Torkelson in the 7th – Kriedler drives in 3 & scores twice on the night on only 1 hit. Jonathan Schoop hits a sac fly to score Rookie Kerry Carpenter in the 9th & Kriedler hits a sac fly to score Spencer Torkelson for the final Detroit run & his 3rd RBI of the night. Detroit came in losers in 6 of their last 7 prior to this game but the last place Tigers have now beaten the Orioles in all 4 games they have faced them this season. Baltimore is shutout for the 10th time this season & has now lost 8 in a row against Detroit dating back to last season & falls to 5 games back of Seattle or the final AL Wild Card spot w/ 16 games left & Mariners own the tiebreaker between the 2 teams after winning the season Series. 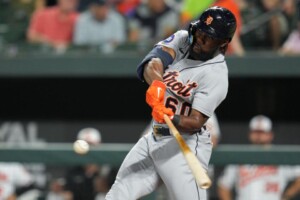 Game 2 : Tigers 3, Orioles 2 – Joey Wentz takes a shutout into the 6th inning, Akil Badoo & Kerry Carpenter homer as the Tigers take the Series against the fading O’s & remain unbeaten against them this season. Badoo hits a 2-run shot in the 3rd to give the Tigers the lead for good against O’s starter Austin Voth who goes 5 innings, allows 2 runs on 6 hits, strikes out 3 & walks none but gets no help from his bats. Wentz allows just 2 hits over 5 2/3 shutout innings, strikes out 4 & walks 2 – it’s the 3rd time in 5 major-league starts that the Rookie has held the opposition scoreless. Carpenter hits a solo shot in the 7th off of reliever Joey Krehbiel to add a huge insurance run that Detroit would desperately need because Rookie Gunnar Henderson launches a 2-run shot off of reliever Joe Jimenez to cut the lead to 1, it’s the first Orioles runs of the entire Series. Mountcastle singles off of Jimenez to knock him out of the game & Andrew Chafin walks Anthony Santander before he strikes out Rookie Adley Rutschman to end the inning. Gregory Soto works a perfect 9th to close it out & earn his 26th save in 28 tries. Jeimer Candelario has 4 hits & Badoo has 2 hitting in the 8th & 9th holes for Detroit who wins their 2nd in a row after losing 6 out of 7 & moves to 5-0 against the Orioles this season. Baltimore has lost 4 out of 5 & 9 in a row against Detroit dating back to last season, they came into the game trailing Seattle by 5 games for the final AL Wild Card spot. 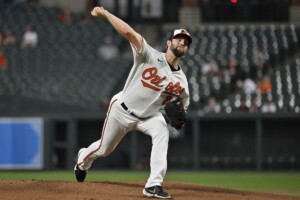 Game 3 : Orioles 8, Tigers 1 – Jordan Lyles tosses the 2nd complete game of his career, Kyle Stowers homers & drives in 3 & the Orioles avoid their first ever season sweep by the Tigers as they pick up a huge win to remain in the hunt in the AL Wild Card race. The O’s score 3 times in the 3rd against Detroit starter Matt Manning as Adley Rutschman grounds into a fielders choice to score Ramon Urias, Rookie Gunnar Henderson doubles to score Cedric Mullins & Ryan Mountcastle hits a sac fly to score Rutschman to give the Orioles their first lead of the season against the Tigers. Henderson has 2 hits in this game & at least 1 in 15 of his first 20 games. Stowers drills a 2-run shot off of & Manning who departs after a walk to the next batter, Ramon Urias & is replaced by Daniel Norris. Manning goes 5 1/3, he allows 5 runs but only 3 earned on 4 hits, he strikes out 4 & walks 5 to tie a career-high. Carpenter hits a solo shot in the 7th to end the shutout, it ends a streak of 14 in a row retired by Lyles & is the 6th HR in 28 games for Carpenter. The Birds get 3 more back in the 8th when Stowers singles to score Mateo, Robinson Chirinos singles to score Austin Hays & Rutschman singles to score Stowers against reliever Jason Foley as the O’s pull away. Lyles allows 1 run on 3 hits, strikes out 6 & walks none, including a perfect 9th inning. His previous complete game was September 30, 2012 for Houston against Milwaukee & now 10 years later he adds his 2nd. Detroit loses for the 7th time in their last 10 games but for only the first time against the Orioles in 10 games dating back to last season. Baltimore wins for just the 2nd time in their last 6 games including for the first time in their last 10 against Detroit as they snap 9 game losing streak against them dating back to last season.

Baltimore wastes a golden opportunity to gain ground in the AL Wild Card race & will now host Houston for 4 who comes in w/ the best record in the AL but they are still the same team that the Orioles took 2 out of 3 from last month.
⚾️⚾️⚾️
GO O’S!!
#BarelyBreathing