The Game Day Decrees are here to knock yo old ass out like your name is Bernard Hopkins and you know it’s way past your bed time for you to be out walking down the mean streets of 32 Kings Road. Yo, B-Hop is a legend…no doubt about it. He might be the toughest 53 year old I know next to Omar after he shaved his head. But my man got his face rocked and fell through those ropes, laying down there casket-ready. 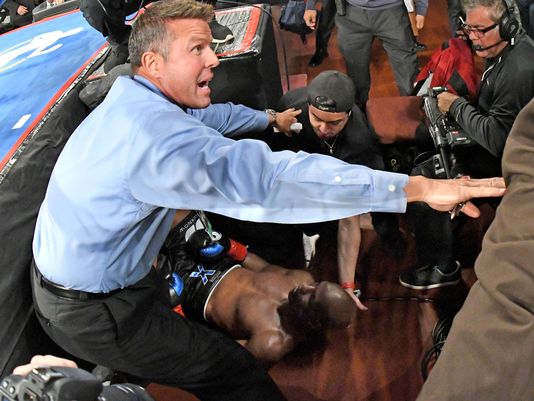 All we needed was Montelle Jordan to show up ringside and sing “Eye on the Sparrow” and we could have put the dirt on ol’ Bernard and been done with it right then and there.

This edition of the Game Day Decrees will recap the action from Week 15 of the NFL, which has officially been dubbed “The Week of the Kicker.” We had 11 kickers score ten or more points for their teams last week. Nine of them made three or more kicks in a single game, while two kickers nailed kicks in wins against their former teams. It felt like Stephen Curry was out there jacking it from half court – 3’s were dropping everywhere! This week is Rivalry Week around the league, as 11 of the 16 games are divisional matchups between teams that are playing for the second time this season and will need a win over a familiar foe at the end of the season. Several teams’ playoff fates will be decided this week if they can avenge their loss from earlier in the year or complete the season sweep over a hated rival. Week 16 is the penultimate weekend of the 2016 NFL season, so you know what that means, right? I have to channel my inner George Pelecanos to set us up for the finale! Let’s get into it!

The GameDay Decrees are here and before we go any further – square up! Because my momma bought me that chain! Week 12 around the NFL featured the crushing of some major egos, but was highlighted by the clashing of two egos when Raiders’ WR Michael Crabtree and Broncos’ CB Aqib Talib decided they had […]

The GameDay Decrees are here and we need to get right into it. The disrespect going around the NFL this week is at an all-time high, and now – the war is on! We got quarterbacks getting benched, coordinators getting fired, coaches TRYING to get fired, general managers pulling the card on their players, rivals […]

GameDay Decrees – Calm Before the Storm

The GameDay Decrees are back this week after being suspended, then appealing said suspension, then being denied said appeal, just to come back and still be suspended regardless. Week 10 served as a momentous set-up for what is bound to be an epic second half of a rather bizarre season. Parity definitely wasn’t on the […]

The GameDay Decrees are back! And around here, we fully support the inmates who run the prison. History shows when you do, Morgan Freeman and Tim Robbins will prove not only that the prison industrial complex does indeed exist, but also that a black guy and a white guy can work together to accomplish a […]

The GameDay Decrees are here this week to steal your bike…but we’ll bring it back because we know you have to go to work in the morning. You’re stuck with us for the next 5-8 minutes (depending on how quickly you read) to indulge in the NFL’s action from Week 7. Whatever you may deem […]

The GameDay Decrees are here and if we weren’t scratching our heads after last week, then Week 6 has left us flat-out dumbfounded. You would think the more we progress through the season the more understanding we would have with what this season is becoming, but I have no idea what to make of the […]

GameDay Decrees – Parity with a Side of Protest

The GameDay Decrees are here to drop these bars on you like we’re in the BET cipher…or like the way black folks are putting down Dove soap. Either way, Week 5 is in the books and we have a lot to go over. The NFL is in shambles right now…and I am here for ALL. […]

The Gameday Decrees are back and MANNN! A lot has happened around the league the last two weeks. We somehow made it home from the vacation the whole league took to Upset City in Weeks 3 and 4 as the NFL’s underdogs went toe to toe with the pre-ordained juggernauts. This past Sunday we watched […]

We are 12 days into the 2017 season and I have no idea where to start, y’all. None. Week 2 gave us a much better overall product compared to opening weekend. Although the three primetime games were a dud, we saw scoring improve around the league and there were actually a few games worth watching […]

Week 1 of the NFL season is in the bag, y’all! I gotta say it was refreshing to FINALLY watch games that matter and see the league’s best players take the field with something to prove. There’s no doubt we were shocked by some of the final outcomes, but I can’t front – throughout the […]

Back in my church-going days I once heard a pastor say, “in order for something great to begin, something great must also end.” If that dude was right, then his cryptic words apply perfectly with what is about to happen to our precious day of worship. Sundays are about to undergo changes of epic proportions […]

The New York Giants are putting together another one of their prototypical dark horse seasons after they defeated the Lions at home last week. For the second week in a row, they dismantled a current division leader and have emerged as one of the few teams no one wants to play. It was one of […]

The Miami Dolphins were one of the quiet winners from last week after they came up with a win in New York in a game that no one wanted to watch. It featured two backup quarterbacks and a lack of prominent names, but the Dolphins’ stars came to play and made enough of them to […]

The Atlanta Falcons are grateful to have played two of the worst teams in the NFL in back-to-back weeks, as they invited the 49ers into their home and didn’t even let them take their coats off before they stomped them out at the front door. They 21-skunked the Niners in the first quarter led by […]

The San Diego Chargers lost their third game in a row last week and their second of the season to the Oakland Raiders. It was yet another Chargers game where they showed their potential and ability to compete against the top teams, but they fail to put together a full four quarters of quality football. […]

The Green Bay Packers escaped Week 14 as maybe the most fortunate team in the league, pulling out a win in the final minutes while the other teams fighting for a wild card spot took an L. They actually ran the football last week. Like, almost as successfully as Aaron Rodgers threw the ball. They […]