Pitching Wright Into Their Hands

Orioles 2, Reds 1 (10 innings) : Going the Extra Miley – Wade Miley pitches 8 solid innings of 2 hit baseball & takes a No-Hitter into the 4th inning before Joey Votto takes him deep to center (#5) in the 4th to tie the game. Jonathan Schoop’s single to center in the 2nd had given the O’s the early 1-0 lead. Miley strikes out 11 & walks just 1. Reds starter Scott Feldman pitches 7 solid innings, allowing just 1 run on 4 hits, walking just 1 & striking out 4. J.J. Hardy lines a 2-out single to center to score Mark Trumbo & put the Birds back on top for good against reliever Brandon Wood in the 10th. Darren O’Day works the 9th & Brad Brach pitches the 10th to close it out for his 2nd Save in as many chances. The O’s take 2 out of 3 in Cincinnati & will now return home after a lengthy 9 game road​ trip to host Boston for 3 over the weekend. Baltimore now owns the best record in the MLB.
Bal (10-4) Cin (9-7)
WP : O’Day (1-1)
LP : Wood (0-2)
S : Brach (2). GO O’S!! #PuttingExtrasOnit

Orioles 2, Reds 0 : Him In His – Ubaldo Jimenez locks in the zone & shows his good side, pitching 7 2/3 shutout innings, he walks 4 & strikes out 3, allowing just 2 hits. He is in complete control all night, giving the Orioles staff a huge boost & giving Jimenez some much needed confidence. Ubaldo makes quick​ work of the Reds lineup, pitching a gem for the O’s after Kevin Gausman’s rough outing in Game 1. 2B Jonathan Schoop drives in a run on a single in the 2nd off of the Reds young lefty Amir Garrett, who strikes out 12 Orioles in 7 innings, he allows 2 runs on 7 hits, walking just 1. Ubaldo simply out pitches the young lefty & Manny Machado adds a sacfly in the 5th to give him a much needed insurance run. Brad Brach works the 9th to close it out, as closer Zach Britton sits on the 10 DL right now.
The Orioles split the first 2 games in Cincinnati, the rubber game was tonight.
Bal (9-4) Cin (9-6)
WP : Jimenez (1-0)
LP : Garrett (2-1)
S : Brach (1).
GO O’S!! #InterleagueScuffling

One of my newer websites that I’ve checking out is from the League Ambassadors (www.leagueam.com). The guys are what I call the “new jacks” of the sports paradigm. They educate, debate and juggle the various sports topics of the day. You can holla at them through any of today’s social mediums. On one of their recent shows, they brought up a topic that was intriguing: Mike or Kareem?

This can be a decent debate. Their careers actually did intertwine for five years (84-89). By the time Jordan got to the league, Jabbar had won his six league titles. Jordan took over (sort of) to start his own six year title run.

In the case of these two, timing was truly everything. When Jabbar entered the league, he basically did the same thing that he did both in high school and college: have a impact. He became a top three star (in scoring and rebounding) and after future Hall – of – Famer Oscar Robinson came over, he won the first of his championships. He easily could have been the face of a still fledging league that was still trying to get it’s sea legs.

With Jordan, it was a case of spontaneous combustion. He entered the league at a time when the league was creating it’s identity (led by the Godfather of the league –David Stern). With the help of his swag (which wasn’t really a popular word at the time but you get it) and his boy at the time Charles Barkley, they took the league to an entirely different level in terms of popularity and well, commercialism.

I can see why some would make a case for Jordan. He helped bring the bright lights to the league as well as make it the popular game that it still is. Now, while I won’t make the connection that Jabbar was the Mike before Mike (in part because he didn’t want to be), you can not deny his career achievements as well as his consistency. He was still averaging 23 points a game at age 38. While you have organizations like ESPN having him the greatest player in league history (ahead of Jordan), for me I still like Mike.

I still remember a dream I had when I was getting ready to play my dream pickup game with the greatest players in NBA history and I had first pick. It wasn’t any doubt who my first pick was.

#3 Wizards vs #6 Hawks Preview :
Washington won the Southeast Conference, their first Division title in 38 years. Atlanta makes it in, due to their hard play, staying relevant enough the entire season.
Key matchup : PG John Wall vs PG Dennis Schroeder.
John Wall is one of the NBA’s most explosive G’s & wastes no time finding his teammates, Dennis Schroeder is a formidable opponent, one who can present problems & create for Atlanta.
Washington simply has too many scorers, Wall, Bradley Beal, Otto Porter, Brandon Jennings, Markieff Morris & Kelly Oubre. Marcin Gortat will be a factor inside. Can Atlanta match the physical presence upfront by Washington? The answer is No.
The Hawks do have Paul Millsap, but after him & Dennis Schroder there is alot to be desired by the Hawks in terms of being able to keep up w/ Washington’s scoring.
My prediction : Wizards in 5. Washington should quickly dismiss of the Hawks, a this team has their eyes on the prize. The Washington Wizards wanna go to the NBA Finals.
The Atlanta Hawks will be sitting home in a few weeks. There just is not enough firepower in this Hawks team right now.. 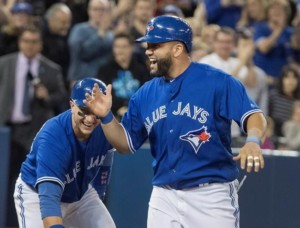 Blue Jays 2, Orioles 1 : Bird Blast – Kendrys Morales hits a walk off solo homer to right center as the Jays win in extras in Toronto. It spoils an outstanding effort by starter Alec Asher, who goes 6 1/3 shutout innings in his Orioles debut. Asher allows just 1 run on 3 hits, he strikes out 5 & walks 1. Asher hits Jose Bautista & allows a single to Troy Tulowitzki before leaving in the 7th w/ 2 men on. Darwin Barney singles off of reliever Donnie Hart to score Bautista & put the Blue Jays ahead 1-0 in the 7th. Roberto Osuna comes on in the 9th to close it out, but allows an infield single to C Wellington Castillo, as OF Craig Gentry runs for Castillo & steals 2nd, moves up on a sacfly & scores on a sacfly by Jonathan Schoop as the O’s manufacture a run to tie it. Then in the bottom of the 9th, Morales walks it off (#2) against reliever Tyler Wilson to give the Jays their first win in the last 8 games.
Bal (7-3) Tor (2-9)
WP : Osuna (1-0)
LP : Wilson (1-1).
GO O’S!! #BirdFightRoundFive