#3 Wizards vs #6 Hawks Preview :
Washington won the Southeast Conference, their first Division title in 38 years. Atlanta makes it in, due to their hard play, staying relevant enough the entire season.
Key matchup : PG John Wall vs PG Dennis Schroeder.
John Wall is one of the NBA’s most explosive G’s & wastes no time finding his teammates, Dennis Schroeder is a formidable opponent, one who can present problems & create for Atlanta.
Washington simply has too many scorers, Wall, Bradley Beal, Otto Porter, Brandon Jennings, Markieff Morris & Kelly Oubre. Marcin Gortat will be a factor inside. Can Atlanta match the physical presence upfront by Washington? The answer is No.
The Hawks do have Paul Millsap, but after him & Dennis Schroder there is alot to be desired by the Hawks in terms of being able to keep up w/ Washington’s scoring.
My prediction : Wizards in 5. Washington should quickly dismiss of the Hawks, a this team has their eyes on the prize. The Washington Wizards wanna go to the NBA Finals.
The Atlanta Hawks will be sitting home in a few weeks. There just is not enough firepower in this Hawks team right now..

Blue Jays 2, Orioles 1 : Bird Blast – Kendrys Morales hits a walk off solo homer to right center as the Jays win in extras in Toronto. It spoils an outstanding effort by starter Alec Asher, who goes 6 1/3 shutout innings in his Orioles debut. Asher allows just 1 run on 3 hits, he strikes out 5 & walks 1. Asher hits Jose Bautista & allows a single to Troy Tulowitzki before leaving in the 7th w/ 2 men on. Darwin Barney singles off of reliever Donnie Hart to score Bautista & put the Blue Jays ahead 1-0 in the 7th. Roberto Osuna comes on in the 9th to close it out, but allows an infield single to C Wellington Castillo, as OF Craig Gentry runs for Castillo & steals 2nd, moves up on a sacfly & scores on a sacfly by Jonathan Schoop as the O’s manufacture a run to tie it. Then in the bottom of the 9th, Morales walks it off (#2) against reliever Tyler Wilson to give the Jays their first win in the last 8 games.
Bal (7-3) Tor (2-9)
WP : Osuna (1-0)
LP : Wilson (1-1).
GO O’S!! #BirdFightRoundFive 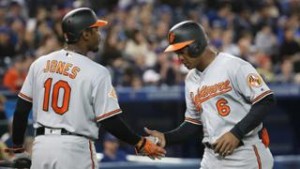 Orioles 2, Blue Jays 1 : Pitching a Fit – In a tightly contested pitchers duel, Kevin Gausman gets just enough run support & the O’s win already win their fourth 1 run game of the year. The Birds score twice in the 5th against Jays starter Francisco Liriano, as Jonathan Schoop doubles to center to drive in C Wellington Castillo & scores on a single by J.J. Hardy to make it 2-0 Orioles. Liriano strikes out 10, as the Jays lefty was on his game, despite a bad 5th inning. He goes 6 2/3, allowing 2 runs on 5 hits, he walks 2. Gausman is just as dominant, going 6 innings, allowing 1 run on 5 hits, he walks 2 & strikes out 3. Zach Britton closes it out in the 9th for his 54th consecutive Save in a row. The Orioles have now defeated the Blue Jays for the third time in a row this year & their 6-2 record is all against the AL East. Baltimore is off to a strong start & sits all alone in 1st place.
Bal (6-2) Tor (1-8)
WP : Gausman (1-0)
LP : Liriano (0-1)
S : Britton (4). GO O’S!! #BirdFightRoundThree

Orioles 12, Red Sox 5 : Deep Impact – The Orioles go deep 5 times, as Trey Mancini hits a pair of longballs, connecting on a solo shot (#1) & is followed up by Jonathan Schoop (#1) as the pair goes back to back in a 6-run 1st inning, all against Red Sox knuckleballer Steven Wright. Manny Machado also doubles home the first run of the game in the inning. Adam Jones tees off against Wright in the 2nd (#2) on a mammoth shot to left & Chris Davis also takes Wright deep to right center. (#2) to make it 8-0 after 2. Mancini homers for the second time (#2) in the 3rd to make it 9-0, but Ubaldo Jimenez can’t even make it through 5 innings & is pulled after just 4 1/3. He allows 5 runs on 8 hits, walking 2 & striking out just 1. C Wellington Castillo doubles to right in the 7th & scores on a base hit by Schoop to cap the scoring. Baltimore splits the short 2 game series in Boston & will now head to Toronto for 4.
Bal (5-2) Bos (4-4)
WP : Givens (2-0)
LP : Wright (0-1).
GO O’S!! #BlastingOff 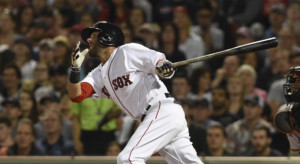 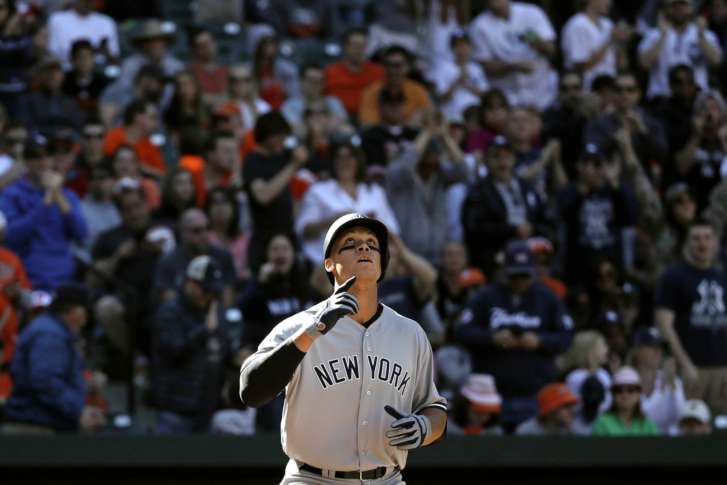 Yankees 7, Orioles 3 : Damn Yankees – The O’s jump out to a 3-0 lead early, but let it slip away late as the bullpen allows all 7 runs. The Yankees score 4 times against reliever Darren O’Day, who walks 3 & allows 2 hits & 4 runs in just 2/3 of an inning. SP Wade Miley walks 7 men in just 5 shutout innings, allowing just 1 hit, but still leaves w/ the lead after 5. Reliever Tyler Wilson gives up a 2-run triple to Ronald Torreyes in the 6th & Aaron Judge hits a solo shot (#1) to tie it in the 8th & Starlin Castro singles in the go ahead run against O’Day in the 9th & Judge drives in another on a groundball. C Austin Romine hits a sacfly to right to drive in the go ahead run & another run scores on a throwing error by 2B Jonathan Schoop to give the Yankees a 4-run lead. The O’s lose for the first time this season, but still finish up the homestand 4-1 & will now ship off to Boston for 2 @ Fenway Park.
Bal (4-1) NYY (2-4)
WP : Betances (1-1)
LP : O’Day (0-1)
GO O’S!! #FourOutOfFive

Kendrick Lamar wrote “When the sun fall out the sky, All I have is me in the land of do or die. A freeway, a gas pedal, and a peace of mind…Now, that’s the ultimate high.”

The high points of life can Humble you or Harm you. This case holds true for Dayna Mitchell’s Son. He walked the halls of Long Beach Jordan High School, went up the road to the State of Washington and now in a matter a weeks, he will hear his name called at The 2017 NFL Draft.

John Ross III is a BEAST and a product of my home, Compton California.

His stats tell it all…. 5″10….188….ran a 4.22 second 40-yard dash, breaking the previous record of 4.24 seconds held by Rondel Menendez and Chris Johnson and still makes time for his family and friends. He has been compared to the likes of another Compton product, Desean Jackson and when asked if he could race anybody in history, he declared it would be Deion Sanders.

I know that on April 27th , John’s name will be called. At that moment all of his hard work and humility of spirit will be paid off.

Orioles 3, Blue Jays 1 : Dylan the Villain – Dylan Bundy pitches 7 dominant innings, allowing just 1 run on 4 hits, while striking out 8 & doesn’t even walk a man, the young right hander strikes out the side in the 1st & cruises the rest of the way. Jays 2B Devon Travis drives in the lone run for the Blue Jays on a bloop single in the 3rd to score Justin Smoak, giving Toronto a 1-0 lead, but Adam Jones blasts a shot down to left in the 3rd to give the O’s the lead right back, 2-1. Chris Davis takes Happ deep to center in the 4th to give the O’s a key insurance run, that they would need. Happ strikes out 9 in 7 innings, allowing just 3 runs on 5 hits, also not walking a batter. Brad Brach works the 8th & Zach Britton closes it out in the 9th, enducing a game ending double play ball for his 50th Save in a row. The O’s sweep this 2 game series from Toronto & will now play New York for 3 @ home.